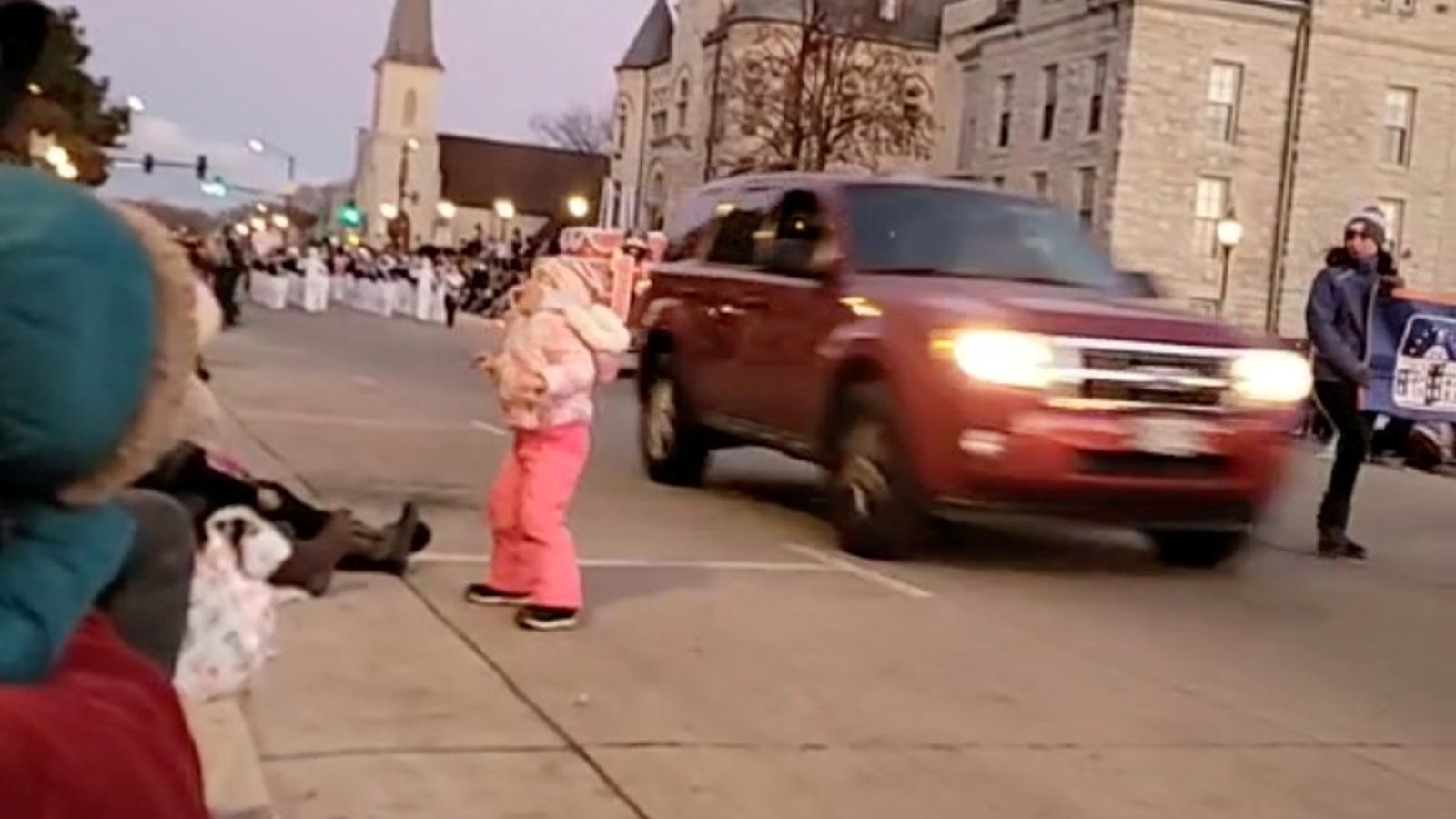 A man police are questioning after five people were killed and more than 40 were injured when a vehicle drove through a Christmas parade in Wisconsin has been named in US media.

NBC reported that Darrell Brooks, 39, from Wisconsin, is a person of interest being held in custody. He has not been charged with any crime, it said.

It comes after a red SUV hit dozens of people in the city of Waukesha, which is about 20 miles west of central Milwaukee, just before 5pm on Sunday.

One video showed a woman screaming “Oh my God!” repeatedly as a group of young dancers was struck, while a father described going from “one crumpled body to the other” in search of his daughter.

“At this time, we can confirm that five people are deceased and over 40 are injured,” the Waukesha Police Department said on its Facebook page. “However, these numbers may change as we collect additional information.”

15 children have been taken to Wisconsin’s Children’s Hospital, but their condition is unknown. 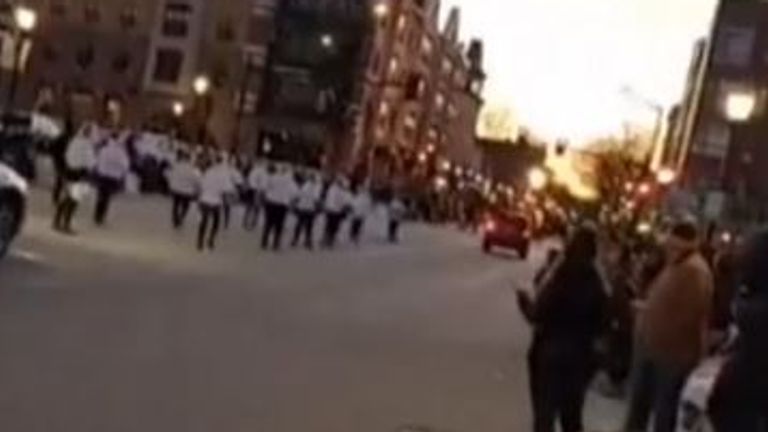 Five people have died and more than 40 are injured after a vehicle drove through a Christmas parade in the US state of Wisconsin.

Earlier, officials said a “person of interest” who may have a significant criminal history was being questioned overnight, adding that investigators were looking into the possibility the driver had been involved in an earlier incident involving a knife and was fleeing when the vehicle reached the parade.

The speeding SUV appeared to approach the parade from behind, and police chief Dan Thompson said an officer has shot at it in an attempt to stop it as it crashed through the barriers. It is estimated it was travelling at about 40mph.

No one was injured by the police gunshots.

Eleven adults and 12 children were taken to hospital after being hit by the vehicle and Mr Thompson confirmed there were “some fatalities”. Many took themselves to hospital to be treated for injuries.

Corey Montiho, a Waukesha school district board member, told the Milwaukee Journal Sentinel that his daughter’s dance team was hit by the vehicle.

“There were pompoms and shoes and spilled hot chocolate everywhere,” he said. 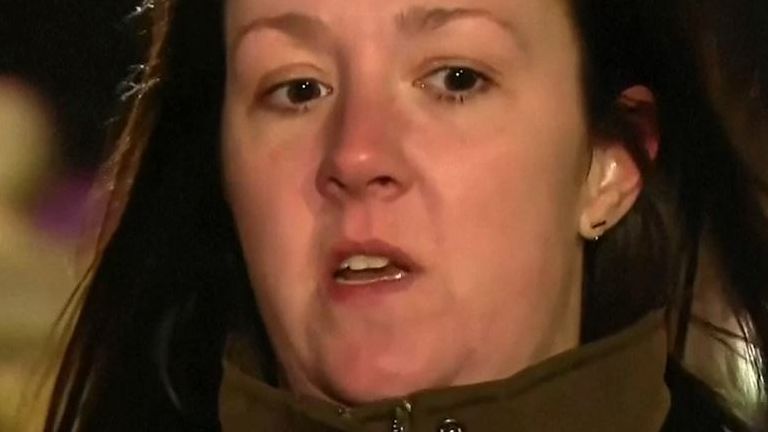 Witness describes what she saw and heard in Waukesha after an SUV was driven into a crowd.

“I had to go from one crumpled body to the other to find my daughter,” he said.

Chris Germain, co-owner of the Aspire Dance Center studio, had about 70 people in the parade, including children as young as 2 being pulled in wagons and participants up to 18 years old.

“There were small children laying all over the road. There were police officers and EMTs doing CPR on multiple members of the parade,” he said.

Milwaukee Dancing Grannies confirmed members of their troupe are among the dead.

“Their eyes gleamed… joy of being a Grannie. They were the glue… held us together.

“Our hearts are heavy at this most difficult time, as more information and updates become available it will be posted.

“Please keep them their families, friends, the Milwaukee Dancing Grannies and everyone who lives have forever changed in your thoughts and prayers.”

Angela O’Boyle, whose apartment overlooked the Christmas parade, told CNN she heard people screaming and shouting for their children.

She said: “All I heard was screaming and then people yelling out their children’s names.”

Ms O’Boyle added that she “saw the car come and plow into the band that was just past my balcony at that point”. 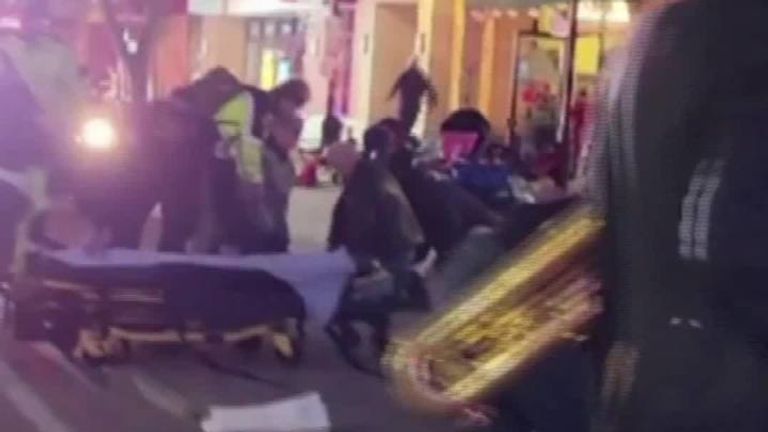 Five deaths have been confirmed, with many more injured after a vehicle was driven into people at a Christmas parade.

“It hit at least two people right away and rolled over them.

“And then continued down the road to People’s Park which is at the end of the block and then kept going, it didn’t stop.”

Former top FBI official accused of trying to get Russian oligarch off sanctions list
Ex-boyfriend of George Santos speaks out to CNN
How Andrew Yang wants to fix the US economy
Sky reporter blocked from asking JK Rowling question
Ukraine Invasion: All the latest developments