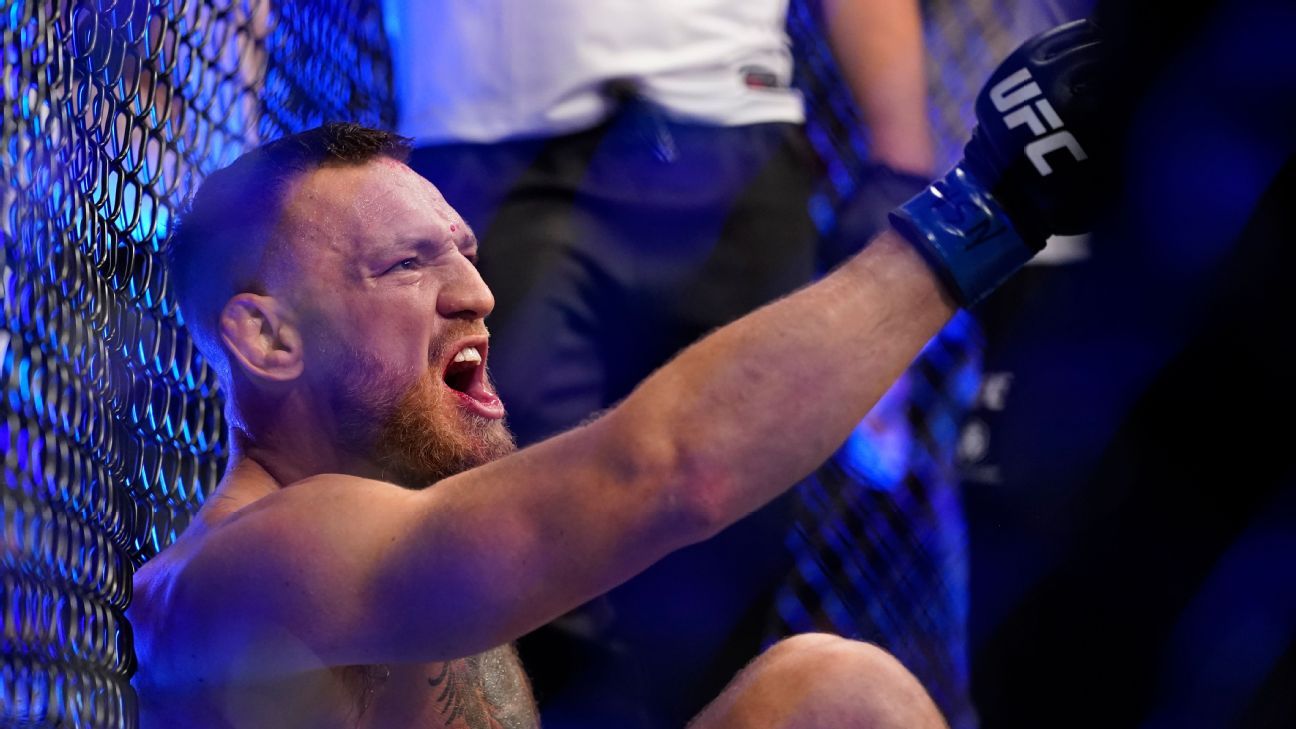 Four months removed from a devastating leg injury against Dustin Poirier at UFC 264, Conor McGregor has begun his public campaign to line up his next opponent inside the Octagon. Unlike previous efforts, however, this latest push has been broader in scope.

As he sat injured in the cage back in July, McGregor was lobbying for a fourth fight against Poirier, who has since scheduled a title fight against Charles Oliveira. After teasing a move to welterweight on several occasions over the years, McGregor insulted Jorge Masvidal. In recent weeks, as Max Holloway defeated Yair Rodriguez, McGregor posted a video on Twitter in which he stalked back and forth in his house in front of his TV screen, implying he’d like to face the former UFC featherweight champion for the second time.

As long as he’s on the mend, and eyeing a return at some point in 2022, speculation will run rampant about McGregor’s next opponent until a contract is signed. And with so many scattered callouts, our panel of MMA insiders — Brett Okamoto, Marc Raimondi and Jeff Wagenheim — digs into which ideas make the most sense.

Okamoto: Gentlemen, I can’t tell you exactly when Conor McGregor will be healthy enough to return to the Octagon, but what I can tell you is that he might call out every man, woman and child on the roster between now and then. Notorious has been active on social media as of late.

Responding to friendly offers from Michael Chandler. Pacing in his living room to the sight of Max Holloway. Still offering explanations on what happened against Dustin Poirier. Insulting Jorge Masvidal. Even Chael Sonnen got some McGregor wrath. Sounds like he wants to fight everyone. So, the question we’re here to answer today is simple: Who should it be? Jeff?

Wagenheim: Well, I know we’re here to discuss what McGregor fight we want to see next, Brett, but what I’m most looking forward to, in a cringey way, are more of his inevitable social media posts from home on fight night. The recent video of him in his living room pacing in front of his TV, shirtless, was comical — but more in a laughing-at-him than laughing-with-him way. That’s a bit sad for a star who once was in full command of the sport and his destiny within it. But the man has become a caricature and a creep, and I no longer find him interesting.

I know the Conor acolytes will call me a hater for saying that, so I’ll just point out that there was a time not so long ago when I was pretty vocal about McGregor being as good as it gets in MMA. His fighting was beautiful — a fluid and efficient assault on his opponents. His callouts and mental warfare were just as well-targeted. And if he lost, he did so with grace and a dogged determination to do better next time. But now? Chael Sonnen was actually being kind when he called Conor “a little, rich weirdo.”

So, yeah, I can muster some thoughts on a possible next Conor fight. But Marc, why don’t you have your say first.

Raimondi: It’s more difficult at this point to find a high-profile fighter who has not in some way been involved in a McGregor Twitter beef than one who has been. Khamzat Chimaev is a recent one. And let’s not forget McGregor’s barbs pointed at our own colleague, the retired Daniel Cormier.

Most of these names are not reasonable return opponents for McGregor. At least, let’s hope not. I will throw out a pair of people I am interested in, though, whom McGregor has been tied to via social media callouts recently: Chandler and Tony Ferguson. I think both are viable McGregor opponents upon his return. Personally, I’d love to see McGregor vs. Ferguson because of the bad blood there, the history with both being involved with Paradigm Sports Management and, of course, both men being badly in need of a win.

Chandler is also in need of a win, although despite two straight losses, his UFC signing cannot be viewed as anything but a success. The dude is instant action and came within a few punches here and there of being the UFC lightweight champion and 3-0 in the promotion.

Okamoto: Raimondi has some good taste in McGregor comeback fights here. Chandler would be my No. 1 pick. He was a splashy free-agent signing, and his stock has only gone way up since, even though his record is 1-2. That fight makes sense.

Ferguson? Yeah, but I just don’t see any chance McGregor takes the fight, so it’s hard for me to even picture it.

The Nate Diaz trilogy is always, always, always right there, and if that ends up happening, I don’t think anyone will complain (although Diaz doesn’t want to wait for it, and if he wants to fight sooner, the UFC should work with him to find a fight that makes sense).

Max Holloway would be fantastic, but I do think Chandler makes more sense. Holloway is No. 1 contender at featherweight. McGregor doesn’t deserve to fight the No. 1 of any division. The fact he’s still inside the top 10 of the UFC’s lightweight rankings is mind-blowing. If we landed on Holloway vs. McGregor 2, I’d personally love it, but I kind of doubt it’ll happen.

Wagenheim: The names both of you tossed out make a whole lot of sense to me, because they satisfy my No. 1 criterion: that McGregor does not belong inside the cage right now with someone who wears a championship belt or is within reach of one. That might seem obvious, given that he is 1-3 since 2016. But the UFC sometimes has shown a twisted philosophy on booking title fights: If it makes dollars, it makes sense. And Conor is the biggest earner of them all.

But while belts obviously do matter to McGregor, they’re not essential to making his fights bigger than big. So yeah, put him in the cage with any one of those guys — Chandler, Ferguson, Diaz, Holloway — and it’s a huge night for all involved. I know we’ve been talking about lightweights here, but what about the Leon Edwards-Jorge Masvidal loser, assuming that fight, which was canceled after Masvidal’s injury, gets rebooked? Any takers for that one at 170?

Raimondi: I’ve long said I wouldn’t mind seeing McGregor vs. Masvidal in a battle of two of the biggest draws in the UFC. But the timing is not right. Plus, we don’t even know if he’s fighting Edwards next. I have a sneaking suspicion that they’ll forgo that fight, give Edwards a title shot against Kamaru Usman and finally do the grudge match between Masvidal and Colby Covington.

I don’t think McGregor should be in the title picture at this stage. But surely he and his team will make a hard push to fight Dustin Poirier if Poirier becomes champion by beating Charles Oliveira at UFC 269 on Dec. 11.

Brett, you mentioned the McGregor vs. Diaz trilogy. Do you think the UFC does everything in its power to make that happen as soon as possible in case Diaz leaves as a free agent?

Conor McGregor says he will be on crutches for six weeks following surgery on his tibia and sends a message to Dustin Poirier.

Okamoto: Yes, I do. It’s no secret Diaz has one fight left on his contract. If you’re the UFC, you obviously want to maximize the value of that final fight — and there is no other fight for Diaz as valuable to the company as the McGregor trilogy. So, that’s for the UFC and Diaz to figure out. I understand the UFC wanting to maximize that final fight, but I also understand Diaz not wanting to be held hostage to McGregor’s timeline. We’ll see what happens.

It’s hard to come up with the perfect answer for McGregor’s next opponent, because we really don’t have a firm idea of when he’ll be back. Right now, Chandler makes the most sense to me. In a few months, if Diaz still hasn’t fought, I imagine I’ll say that makes the most sense. Or Holloway, if he were to beat Volkanovski to reclaim his title and then expresses a desire to move up.

But I’ll tell you who won’t make sense. DUSTIN POIRIER! Can we be done with that already? I’m over it. And if Poirier is holding the lightweight belt at the time McGregor returns, then I’m really, really over it.

Wagenheim: I like the way you think, Brett. Let’s not focus just on who McGregor should be matched up with; let’s also be clear on who he should not be in a cage with. No more Poirier-McGregor! Enough already!

Now, you guys are a lot more plugged in to the machinations of the UFC on a day-to-day basis than I am, so I will defer to you both in any conversation about what will happen. But where I do feel comfortable weighing in is on what fights are most appropriate. And I tend to agree with both of you that Diaz and Chandler would be the right matchups.

Monday through Friday, host Pablo Torre brings you an inside look at the most interesting stories at ESPN, as told by the top reporters and insiders on the planet. Listen

I guess I lean Nate because it’s pure entertainment, guaranteed to produce a massive buildup and, in terms of the fighters’ places in the hierarchy of the lightweight division, is totally out of left field. But if the UFC wants me to stop laughing at Conor’s embarrassing fight-night social media posts, it should give him something else to do, like complete that Diaz trilogy.

Raimondi: I don’t think we’ll find anyone who doesn’t want that third Diaz matchup, and I totally agree with Brett that the UFC will try to make that happen next year. My question is, what if Diaz wins and then leaves? That would be a disaster for the UFC. Coming off a McGregor win, Diaz would be a massive mainstream name, and he could go cash in elsewhere. It’s super risky.

Brett, is there a way for the UFC brass to mitigate that? Or do you think they’ll be willing to roll the dice for perhaps the most lucrative fight in promotion history?

Okamoto: If the UFC has no hope of re-signing Diaz and he has only one fight left, it has to do the trilogy. It’s worth too much money. And by not doing it on the final fight of Diaz’s deal, you also run the risk of the trilogy someday happening outside of the UFC, which is a bigger risk than sending Diaz into the open market as a superstar (which he already is).

It will definitely be interesting to see what happens. In the meantime, Marc, I think McGregor just called you out.