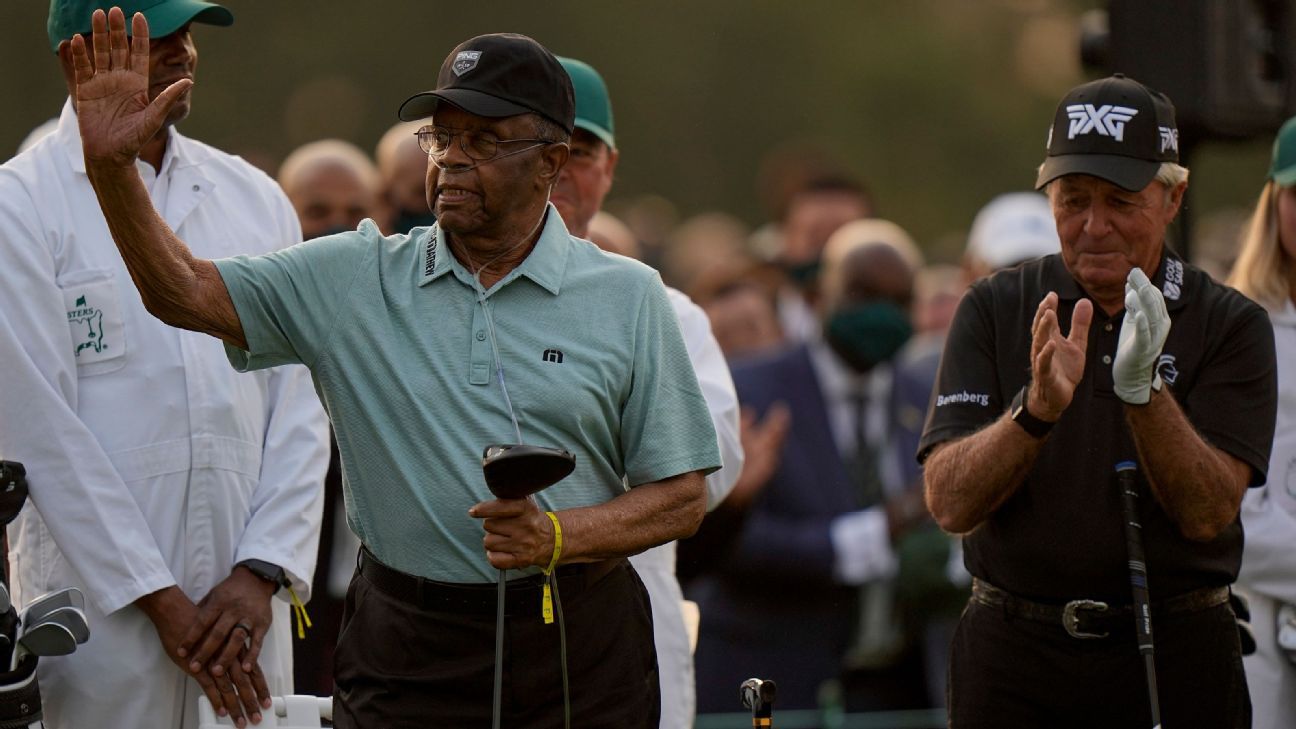 PGA Tour pioneer Lee Elder, the first Black player to compete in the Masters, has died at age 87.

The tour confirmed his death on Monday morning.

Elder, a four-time winner on the PGA Tour, made his groundbreaking appearance at Augusta National in 1975. He was celebrated at the Masters this past April when he was named an honorary starter alongside Jack Nicklaus and Gary Player.

“My heart is very soft this morning, not heavy soft, soft because of the wonderful things that I have encountered since arriving here on Monday and being able to see some of the great friends that I have made over the past years, especially like these two gentlemen that are here,” Elder said at the time of Nicklaus and Player.

“We have competed against each other, and we have certainly enjoyed a lot of pleasant moments. I just want to say thank you so very much to have me here. It’s a great honor, and I cherish it very much, and I will always cherish it, and I want to thank the chairman for extending me this great privilege.”

Elder went on to play in five more Masters and 34 major championships, recording seven top-25 finishes. He tied for 11th at both the 1974 PGA Championship and the 1979 U.S. Open.

Elder’s wins on the tour included the 1974 Monsanto Open (which earned him entry to the 1975 Masters), 1976 Houston Open, 1978 Greater Milwaukee Open and 1978 American Express Westchester Classic.

When Tiger Woods became the first Black player to win the Masters in 1997, he acknowledged the groundwork laid by Elder and Charlie Sifford — the first Black golfer to compete on the PGA Tour.

“I wasn’t the pioneer. Charlie Sifford, Lee Elder and Teddy Rhodes paved the way,” Woods said at the time. “I was thinking about them and what they’ve done for me as I was coming up the 18th fairway. I said a little prayer and a thanks to those guys. They are the ones who did it for me.”

Elder’s story was inspirational regardless of race, as he overcame personal tragedy long before qualifying for the PGA Tour through the qualifying school in 1968.

Born in Dallas in 1934, Elder lost both parents before he was 10. His father was killed in Germany in World War II and his mother died three months later.

Former CIA director: US is sending ‘unhelpful message’ to allies
Retired general predicts when Ukraine will see new tanks
Santos’ lies cast harsh spotlight on a powerful Republican
‘I was sad for the institution’: Nancy Pelosi speaks out about McCarthy speaker vote
See the chilling video Chinese protester made before her disappearance