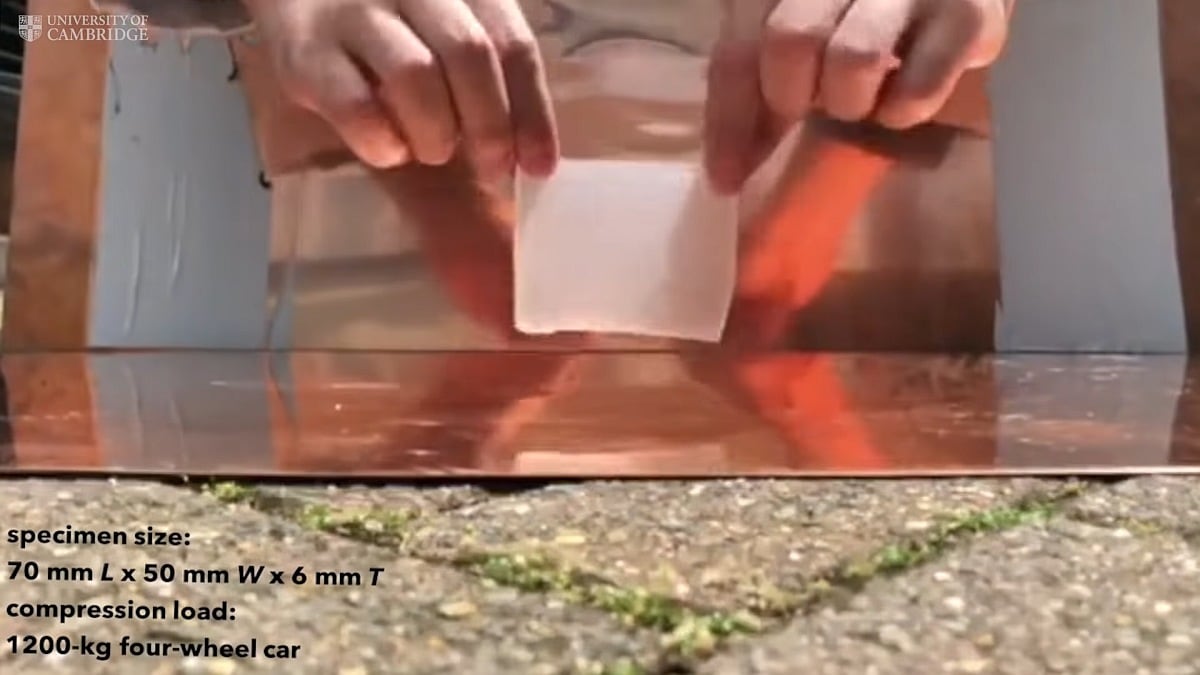 Researchers at the University of Cambridge have invented a soft, jelly-like material that can endure the equivalent of an elephant standing on it and not explode like a water balloon — even though it’s 80 percent water. When the weight is removed, the material returns to its former shape completely without being permanently deformed. The material, described as “super jelly”, is as strong as a shatterproof glass. It could be employed in a variety of applications, including soft robotics, bioelectronics, and biological cartilage replacement. The researchers say that to the best of their knowledge, this is the first time that such a high level of compression resistance has been built into a soft material.

The molecular structure of materials determines how they behave — whether they are soft or solid, brittle or robust. Scientists have been fascinated with stretchy, rubber-like hydrogels. Making hydrogels that can sustain compression without crushing is, however, difficult.

The research results were reported in the journal Nature Materials. On its official YouTube channel, the University of Cambridge shared a video showing how the material works. Take a look at it here:

Dr. Zehuan Huang from the Yusuf Hamied Department of Chemistry, the study’s first author, said that to build materials with the mechanical properties they seek, they use crosslinkers, where two molecules are connected through a chemical connection. Soft and stretchy hydrogels are made with reversible crosslinkers, but rigid and compressible hydrogels are difficult to manufacture, “and designing a material with these properties is completely counterintuitive”, Huang was quoted as saying in a report published on the University of Cambridge website.

The research was led by Professor Oren A. Scherman. Cucurbiturils, which are barrel-shaped molecules, were employed to create a hydrogel that can endure compression. The crosslinking molecule cucurbituril binds two guest molecules in its cavity. The researchers created guest molecules that prefer to stay inside the cavity for longer periods of time than usual, allowing the polymer network to remain closely bonded and endure compression.

Scherman, the Director of the University’s Melville Laboratory for Polymer Synthesis, says that one would assume that it would burst apart like a water balloon with 80 percent water content, “but it doesn’t, it stays intact and withstands huge compressive forces”.

Co-author of the study, Dr. Jade McCune, says that the way the hydrogel withstood compression “was surprising” and “it wasn’t like anything we’ve seen in hydrogels”.

“To the best of our knowledge, this is the first time that glass-like hydrogels have been made,” adds Huang.

Analysis: Does the UK spend enough of GDP on defence?
‘I’m asking the questions’: Sciutto pushes back on GOP lawmaker over debt ceiling
Mike Tyson: ‘Don Lemon full of s***t’
Police search around-the-clock for suspect in brutal kidnapping
What we know about Nicola Bulley’s disappearance