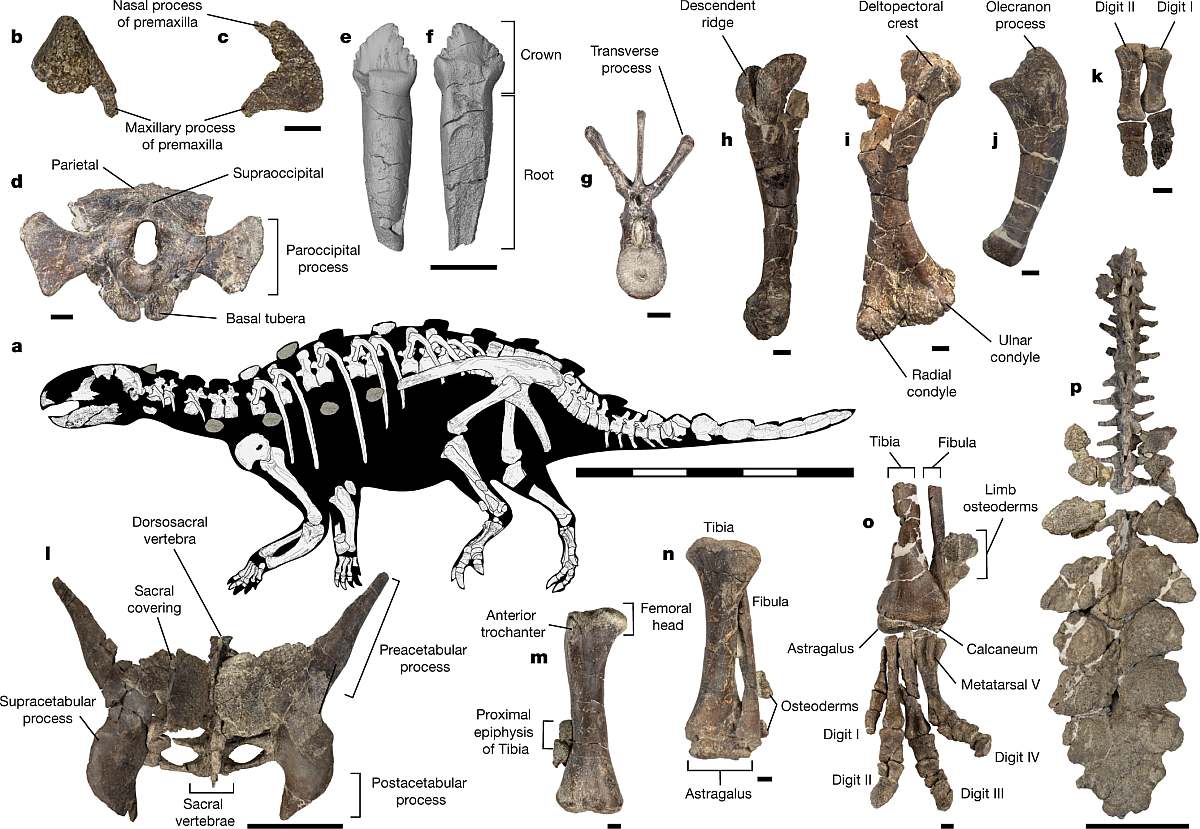 Fossils of armoured dinosaurs have fascinated researchers for a long time. Giving insight into a new species, researchers have now brought to light the fossils of an ankylosaur from the subantarctic region in Chile. This species had a uniquely shaped armoured tail. Named Stegouros elengassen, it featured a large flat tail and at the end of it, seven pairs of blades. This characteristic differentiated it from the paired spikes and clubs of other ankylosaurs. While the Stegouros’ skull is similar to that of other ankylosaurs, other skeletal features are largely primitive and match the characteristics of stegosaurs.

The well-preserved skeleton was roughly two metres in size and belonged to the late Cretaceous period (around 71.7 to 74.9 million years ago) of Magallanes in southernmost Chile. The region is biogeographically related to West Antarctica.

The report, published on December 1, 2021, in Nature, suggests that the unique tail shape could be due to an early evolutionary split in the ankylosaur lineage.

The frond-like tail of the Stegouros has been likened to the Aztec war club called a macuahuitl by palaeontologists Sergio Soto-Acuna, Alexander O. Vargas and their colleagues. Along with the unusually short tail, Stegouros also possessed short limbs that markedly separated it from other ankylosaurs. But phylogenetic studies related to its cranial region placed the new species in Ankylosauria. However, its characteristics are closely related to that of Kunbarrasaurus from Australia and Antarctopelta from Antarctica. Thus, this forms a group of Gondwana ankylosaurs that split from all other ankylosaurs.

Ankylosaurs are one of the most studied armoured dinosaurs. Their heavily shielded bodies and rugged bone plates have been a fascinating feature for paleontological research. Many other species displayed other anatomical weapons. Stegouros’ tail is a unique weapon among all these.

Researchers proposed in their report a new clade called the Parankylosauria to include the first ancestor of Stegouros and all descendants of that ancestor.

In a study last month, another new species of dinosaur was discovered in the US state of Missouri. A staggering 25-30 feet long skeleton showed the remains of a juvenile duck-billed dinosaur called Parrosaurus missouriensis.

Hear what Putin critic thinks could lead to Putin’s downfall
Cost of living: Vulnerable people find every action has a ‘price tag’
See the chilling video Chinese protester made before her disappearance
Buckingham Palace confirms ‘revised policies’ after claims Meghan ‘humiliated’ staff
Calls for energy firms not to force people on to prepayment meters