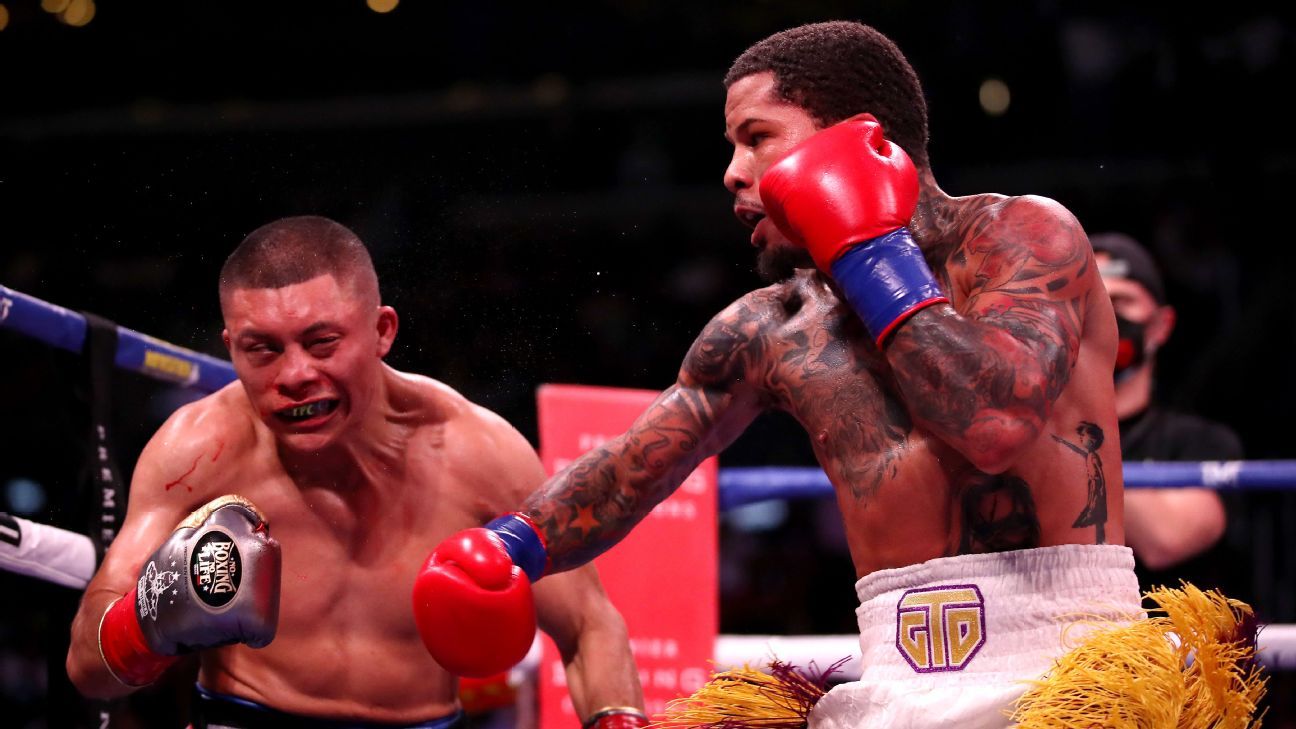 Gervonta Davis remained undefeated on Sunday night with a tougher-than-expected unanimous decision victory over Isaac Cruz. For the first time in Tank’s career, he was extended the 12-round distance.

The 27-year-old Davis said he would have scored the knockout if not for a hand injury that he sustained during training camp — and which was then exacerbated in Round 6. But the result of Sunday’s fight is that Davis failed to impress in a matchup that set him up to do just that.

Cruz proved to have an iron chin, to be sure, and an unbreakable will, but he was a major underdog. His spirited performance ensures that he now must be taken seriously when surveying the ever-shifting 135-pound landscape.

Despite a less than dominant performance, Davis and the team surrounding him projected absolute confidence about Davis’ standing in the lightweight hierarchy.

Top Rank Boxing is on ESPN and ESPN+. Subscribe to ESPN+ to get exclusive boxing events, weigh-ins and more.

Davis had an opportunity to separate himself from the pack this weekend, but he fell short of something so absolute. So too did Devin Haney.

On Saturday, Haney outpointed Joseph Diaz Jr., but Haney was forced to survive some rocky moments late in the fight and ate an unsettling amount of power left hands.

Through both nights, George Kambosos Jr. sat at ringside intently, scouting out the competition. He is less than two weeks removed from shocking the world in a decision victory over Teofimo Lopez one week ago to capture all of Lopez’s lightweight world championships.

In a twist that few could have seen coming, it isn’t Lopez, Davis, Haney, Ryan Garcia or anyone else holding the cards at 135 pounds — it’s the previously completely overlooked Australian. Kambosos has the key to unlocking the crowded lightweight picture, and while all of his potential opponents carry different motivations and gameplans for the future, Kambosos can call his shot.

There’s still one more piece to the 135-pound puzzle as well, wrapping up a dizzying three-week stretch atop the division. In the midst of Kambosos’ win, another man in the mix was largely forgotten (or ignored) as every other fighter shouted about how and why they’re the baddest man at 135 pounds: Vasiliy Lomachenko.

The Ukrainian was the guy at lightweight before an upset loss to Lopez last October. After the bout, he underwent surgery to repair a torn rotator cuff and returned this summer with a destruction of gatekeeper Masayoshi Nakatani, who gave Lopez serious issues.

On Saturday, he fights former titleholder Richard Commey in another high-stakes clash at lightweight that will allow him to strengthen his case for a shot at getting his titles back.

Lomachenko remains the most accomplished fighter in the division, a future Hall of Farmer and two-time Olympic gold medalist who performs wizardry in the ring.

With all three lightweight standouts failing to step up as the clear leader above the rest of the pack, Lomachenko has a showcase to remind everyone why he was once the pound-for-pound king. Take out Commey in spectacular fashion, and the calls will begin for Kambosos-Lomachenko in the spring.

If that matchup materializes, the next step for the rest of the division falls into place pretty naturally.

In the immediate aftermath of Davis’ victory over Cruz, Ryan Garcia was quick to criticize on Twitter, offering that “out of all the lightweights, [Davis is] the weakest.”

“Tank can’t beat me,” Garcia wrote. “He knows that and Mayweather knows that. I’m too fast and I got [too] much accuracy. “C’mon Mayweather, you can’t protect him forever.”

Of all the potential fights at lightweight, Tank-Garcia is by far the biggest of them all, in terms of money and fan interest. In fact, it’s one of the biggest fights that can be made in all of boxing.

And what about Haney? A fight between him and Kambosos in Australia for all the marbles makes plenty of sense, too. But if Kambosos can’t get the right deal to fight a big name for a long-coveted fight in his home country of Australia, he could take on a lesser opponent while Haney and Lomachenko fight for Haney’s title.

If Haney or Lomachenko does get the fight with Kambosos, whoever doesn’t could fight Cruz, who surely deserves another meaningful fight after the test he presented Davis. But we also can’t disregard JoJo Diaz, who proved his mettle in the loss to Haney and is a dependable action fighter.

Whatever happens in 2022, it’s clear that the lightweight division is the hottest in all of boxing. After lots of talk in 2020 and 2021, there are fewer excuses than ever for the big fights not to happen. Once and for all, the marquee matchups must be delivered, and a true lightweight king must prove himself in the ring.

‘I was sad for the institution’: Nancy Pelosi speaks out about McCarthy speaker vote
Exclusive: China ‘likely’ to invade Taiwan in 2027
US Coast Guard says this ship off Hawaii coast is a Russian spy ship
How Andrew Yang wants to fix the US economy
Buckingham Palace confirms ‘revised policies’ after claims Meghan ‘humiliated’ staff