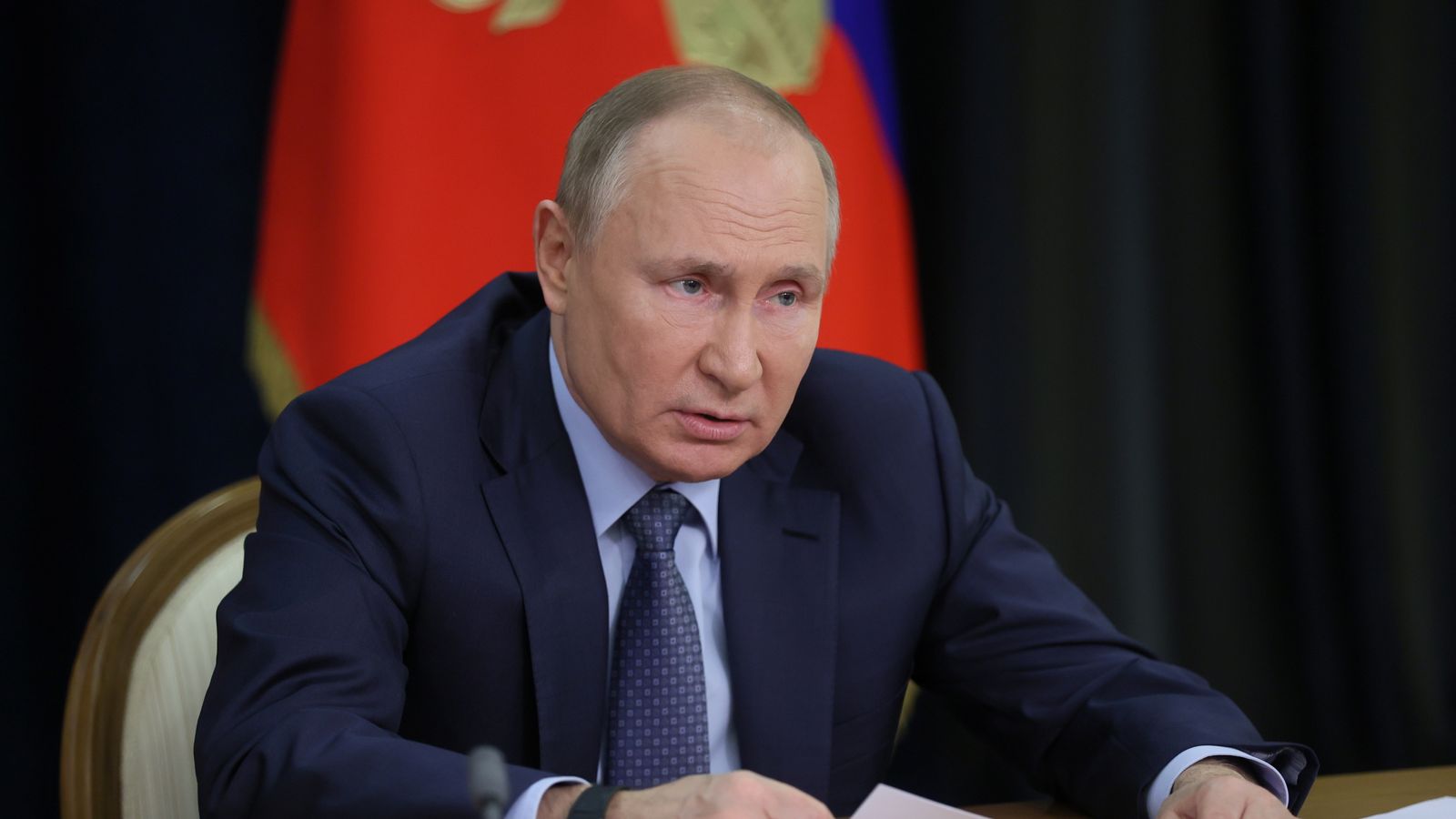 President Joe Biden has told Russian president Vladimir Putin that the US and its allies would respond with “strong economic and other measures” if Russia invaded Ukraine.

The two leaders spoke via a secure video link for two hours as western nations continue to grapple with how to counter a massive build-up of Russian troops along Ukraine‘s border.

The US president’s team described the call as “direct and straightforward”. The Kremlin said it was “frank and businesslike”.

Following the virtual meeting, a White House spokesman said: “President Biden voiced the deep concerns of the United States and our European Allies about Russia’s escalation of forces surrounding Ukraine and made clear that the US and our Allies would respond with strong economic and other measures in the event of military escalation.”

Referring to the successful Russian annexation of Crimea in 2014, US National Security Adviser Jake Sullivan told a news conference that: “President Biden looked President Putin in the eye and told him today that things we did not do in 2014, we are prepared to do now.”

Mr Sullivan would not be drawn on what economic sanctions and other military assistance to Ukraine might look like, saying: “In terms of the specifics, we would prefer to communicate that directly to the Russians, to not negotiate in public, to not telegraph our punches. But we are laying out for the Russians in some detail the types of measures that we have in mind.”

Following the meeting, Mr Biden spoke to the leaders of the UK, France, Italy and Germany.

It was the second joint conversation between the leaders in 24 hours and officials said they agreed a formulated and coordinated response against Russia.

A White House spokesman said: “President Biden reiterated his support for Ukraine’s sovereignty and territorial integrity and called for de-escalation and a return to diplomacy. The two presidents tasked their teams to follow up, and the US will do so in close coordination with allies and partners.”

The Biden-Putin conversation came as Ukraine’s defence minister, Oleksii Reznikov, said an estimated 94,300 Russian troops had been amassed near the border between the two countries and in Russia-annexed Crimea.

Mr Reznikov said that a “large-scale” escalation was possible in January, echoing US intelligence assessments suggesting an invasion could happen within a month.

The Ukrainian defence minister added that his country would not provoke the situation but would fight back if it came under attack.

To try to dissuade a Russian invasion, western leaders are understood to have agreed a package of economic sanctions against the country.

They would include some of the most extreme economic penalties ever imposed on Russia. Cutting the country off from the SWIFT international banking payment system and targeting senior Kremlin officials are among the options understood to be under consideration.

American intelligence officials have been increasingly concerned about President Putin’s objectives as the troop build-up has continued.

Sources have also told Sky News that American and British officials share a concern that Germany and France are not taking the Russian aggression as seriously as they should.

The French President, Emmanuel Macron, is focused on his own election campaign and Chancellor Angela Merkel is due to step down as German leader imminently.

More than any other western leader, she is considered to understand Mr Putin and have a constructive relationship with him.

The central conundrum for western leaders is what to do if the Russian leader ignores their threat of sanctions.

If he decides to push into Ukraine anyway, then what further action can western nations take? This question has been avoided both in the White House and in Downing Street.

The Russian government has made clear its central demand that Ukraine does not join Nato.

Speaking after the Biden-Putin meeting, a Kremlin spokesperson said: “It is Nato that is making dangerous attempts to conquer Ukrainian territory and is building up its military potential at our borders.

“Therefore, Russia is seriously interested in obtaining reliable, legally fixed guarantees excluding the expansion of Nato in the eastern direction and the deployment of offensive strike weapons systems in the states adjacent to Russia.”

A White House official said Mr Biden did not and would not make any such guarantees.

Ukraine War: ‘This is such a stupid tank’: Commander’s plea for modern tanks on Bakhmut frontline
US Coast Guard says this ship off Hawaii coast is a Russian spy ship
Calls for energy firms not to force people on to prepayment meters
Retired general predicts when Ukraine will see new tanks
Exclusive: China ‘likely’ to invade Taiwan in 2027