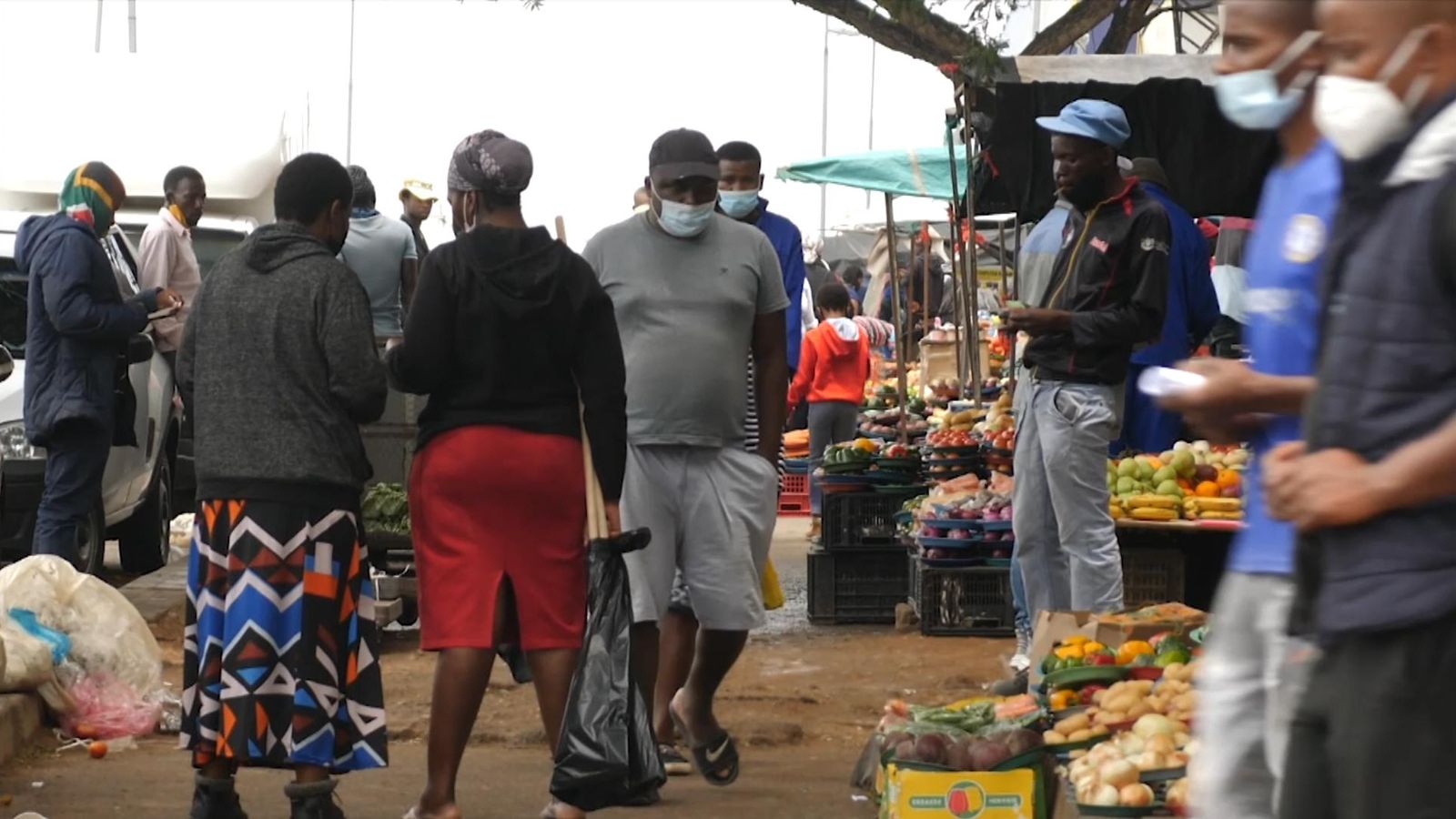 As the world grapples with the challenge posed by the Omicron variant, scientists and residents in South Africa are coming to grips with the real-world impact of this worrying strain.

This country has already seen two weeks of mass infection and the experience is generating the sort of anecdotal information and scientific observation that will help provide the answers that people are desperately looking for.

When it comes questions about transmissibility – or the infectious nature of this emergent strain – you do not really need to speak to the scientists.

Instead, you could spend 15 minutes with local councillor Adolf Marema, who represents Alexandra township in Johannesburg.

Live COVID updates from the UK and around the world

“Is the variant spreading quickly?” I asked.

“Very fast, very fast, like a bomb I can tell you,” he replied.

Nobody in Alexandra seems to use the word “Omicron” to describe their ailments – “flu” is overwhelmingly preferred – but there can be little doubt that Omicron is sweeping through the neighbourhood.

We met a primary school administrator called Muzi Linda, who tested positive for COVID-19 last week and I asked him to describe his symptoms.

“Well, I’ve had a headache, blocked nose, wasn’t too runny, I’ve been coughing, that was the major one.”

When I asked him how he would rate the severity on a scale 1 to 10, he said: “A ‘4’ honestly, because it wasn’t that bad, only after the first day, I decided to take a pill for my headache but that was it.”

Unlike the issue of transmissibility, questions about the severity of Omicron are less certain but there are a lot of people – like Mr Linda – who do not think it is particularly serious.

Others, like Dr Fareed Abdullah, are also beginning to take a view on this critical question.

A leading clinician at Pretoria’s Steve Biko Academic Hospital, he has spent the past 18 months treating the most serious COVID-related cases.

Majority of patients do not have severe COVID symptoms

Yet with Omicron, he has witnessed a significant reduction in the number of patients suffering from the most serious symptoms.

Gesturing towards a forest of assessment tents set up for new patients on the hospital’s forecourt, he gave us an up-to-the-minute rundown.

“Right now, we have 40 patients, either COVID-positive or waiting for results but the difference this time around is that the majority of these patients are not here because of severe COVID-pneumonia.”

Last week, the hospital treated 42 patients suffering from the new strain but Dr Abdullah said he was, “pleasantly surprised” to discover that two thirds were using “room air” – not oxygen or ventilators – to help them breath.

“The picture could change but what is certain is that there is a difference this time around compared to the previous three waves (of COVID-19).”

“I talk to every one of my colleagues who has been working in this hospital and they have all made the same observation (as well as) colleagues at other hospitals and it is the same picture.”

In the UK, documents released by a sub-group of the Scientific Advisory Group for Emergencies (SAGE), say if initial estimates of transmission advantage and immune escape from South Africa are applicable to the UK population, there is the potential for a peak of infections much larger than that experienced in January 2021 – with hospital admissions from Omicron alone reaching 1,000 a day in the UK in January next year.

However, scientists do note that “South Africa is not the UK, both in epidemiological terms but also socially”.

South Africa has a younger population and less people there have been fully vaccinated.

However, South Africans are far more likely to have been infected by previous strains, which like vaccines produce antibodies, so there may be more similarities between the two countries than it first appears.