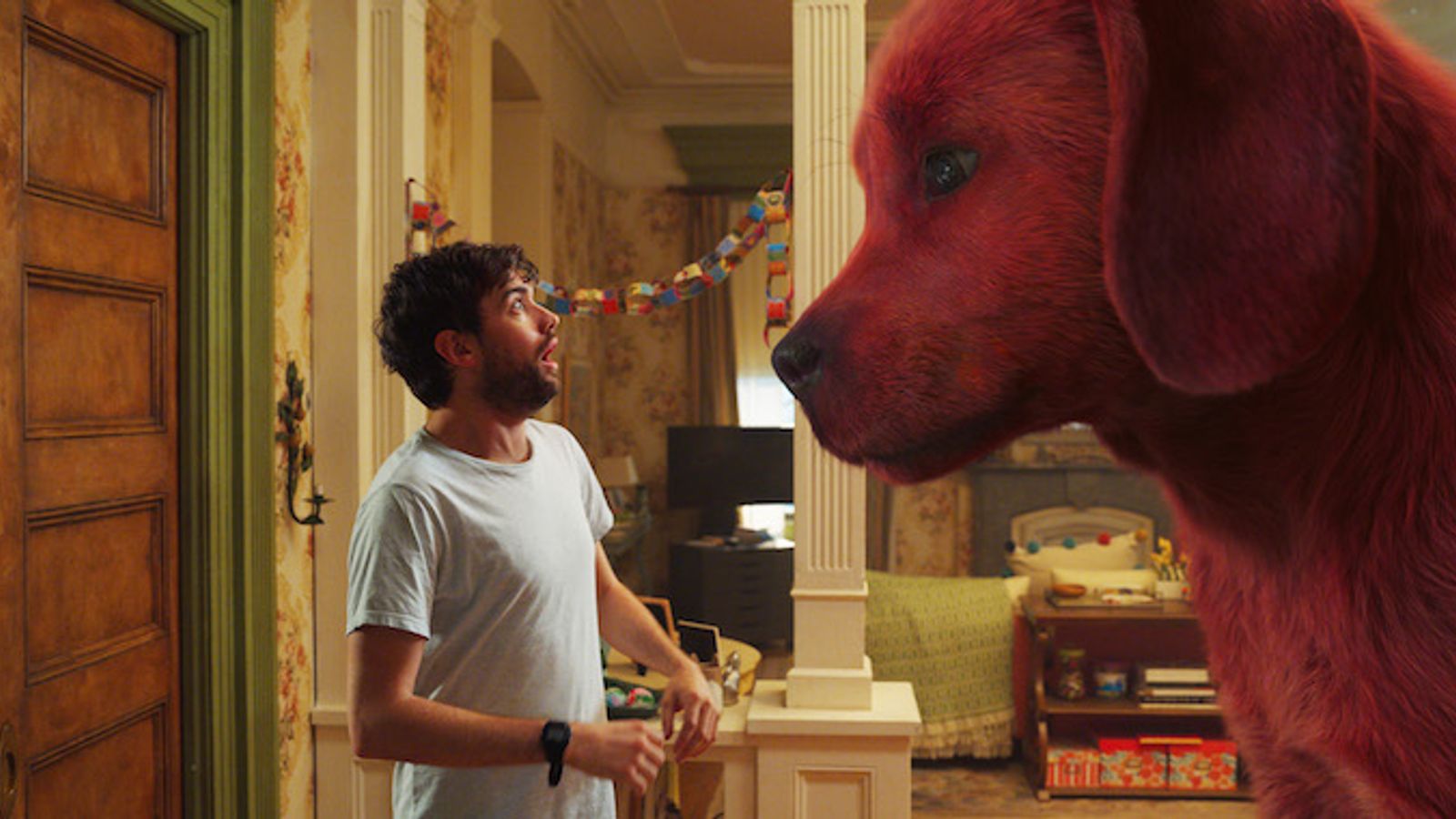 In the UK he’s probably best known for his comedy, but in Hollywood Jack Whitehall is establishing himself as a family film star.

Earlier this year he brought the light-relief in Disney’s Jungle Cruise as the brother of Emily Blunt’s lead character, and now he’s starring as the immature uncle of a young girl in Clifford The Big Red Dog.

The film adaptation sees his character getting more than he bargained for after being asked to look after his niece when she adopts a puppy that grows huge overnight.

Whitehall admits there were certainly elements of his character he could relate to.

“I think probably irresponsible man-child is not necessarily the biggest stretch for me in terms of a character to play,” he told Sky News’ Backstage podcast.

“And yeah my babysitting skills are very seldom called upon.

“I do now have a niece and I’ve never been asked to look after her – every other member of my family has and I am yet to be called up.”

With sequels to both Clifford and Jungle Cruise in the works, Whitehall seems to be settling in to the family film genre.

He says it’s likely because in the US he’s not got the reputation that he does in the UK.

“I just think maybe in America, they haven’t seen all the stuff that I’ve done, so they think I’m an appropriate fit for that kind of stuff, whereas in England everyone has heard some of the jokes that I’ve told and watched some of my stand-up specials, and they’re probably slightly more reticent to put me in family fare.

“I just seem to have sort of fallen into doing those types of films, and I love doing them to be honest.

“It’s so great to be able to make a movie and put it out there into the world and to make something that my friends are able to take their kids to, or my my god children are able to go and see it, because up until this point, there’s nothing that I’ve ever done that they’ve been able to watch.”

Filming Clifford was a ‘refreshing change of pace’

One of those inappropriate-for-kids shows is Travels With My Father, which Whitehall makes with his dad Michael Whitehall.

He joked that after filming that series, working on a children’s film with a CGI dog came as a welcome change.

“I’d been doing like four weeks on the road with a volatile, eighty-year-old alcoholic that can only work five hours a day, and has to stop for lunch for an hour and have a bottle of wine and doesn’t really want to be there,” he said.

“So to go from that to working on set with a guy holding a tennis ball next to you, I mean, it was actually quite a refreshing change of pace for me.

“And the children equally, they were very professional quite a lot of the time; maybe at like six o’clock in the morning when you’re on the make-up truck and they’re playing Justin Bieber full blast for an hour… that was maybe slightly testing – I am a Belieber but at 6am, I think I might be a bit Belatheist.”

While Whitehall says he’s enjoying the Hollywood experience so far, he also admits he’s not sure how long it will last.

“I’m very thankful that I’m having the opportunity to do these things because, you know, I’m British, so I still am sort of dogged by a slight sense of imposter syndrome and the feeling that at any point someone’s going to come and tap me on the shoulder and tell me that I need to get on a plane home and go back to telling inappropriate jokes in pubs to 30 people.”

And although his film career isn’t leaving much time for stand-up at the moment, the comic isn’t ruling out a return to the stage in the future.

“There’s always a draw to stand-up, and the reality of stand-up is that you can just go and dip into it whenever you want, and there’s always going to be a stage somewhere that’s willing to accommodate you,” he said.

“And I’m sure at some point I’ll probably go and do a gig again or try and write a bit of new material, but I’m very happy at the moment focussing on acting and trying to find the next exciting film project.”

Clifford The Big Red Dog is out now in cinemas in the UK – you hear our review in the latest episode of Backstage – the film and TV podcast from Sky News.

Santos’ lies cast harsh spotlight on a powerful Republican
Anti-government protests grip Peru for a second day
How Andrew Yang wants to fix the US economy
‘I was sad for the institution’: Nancy Pelosi speaks out about McCarthy speaker vote
Hear what Putin critic thinks could lead to Putin’s downfall