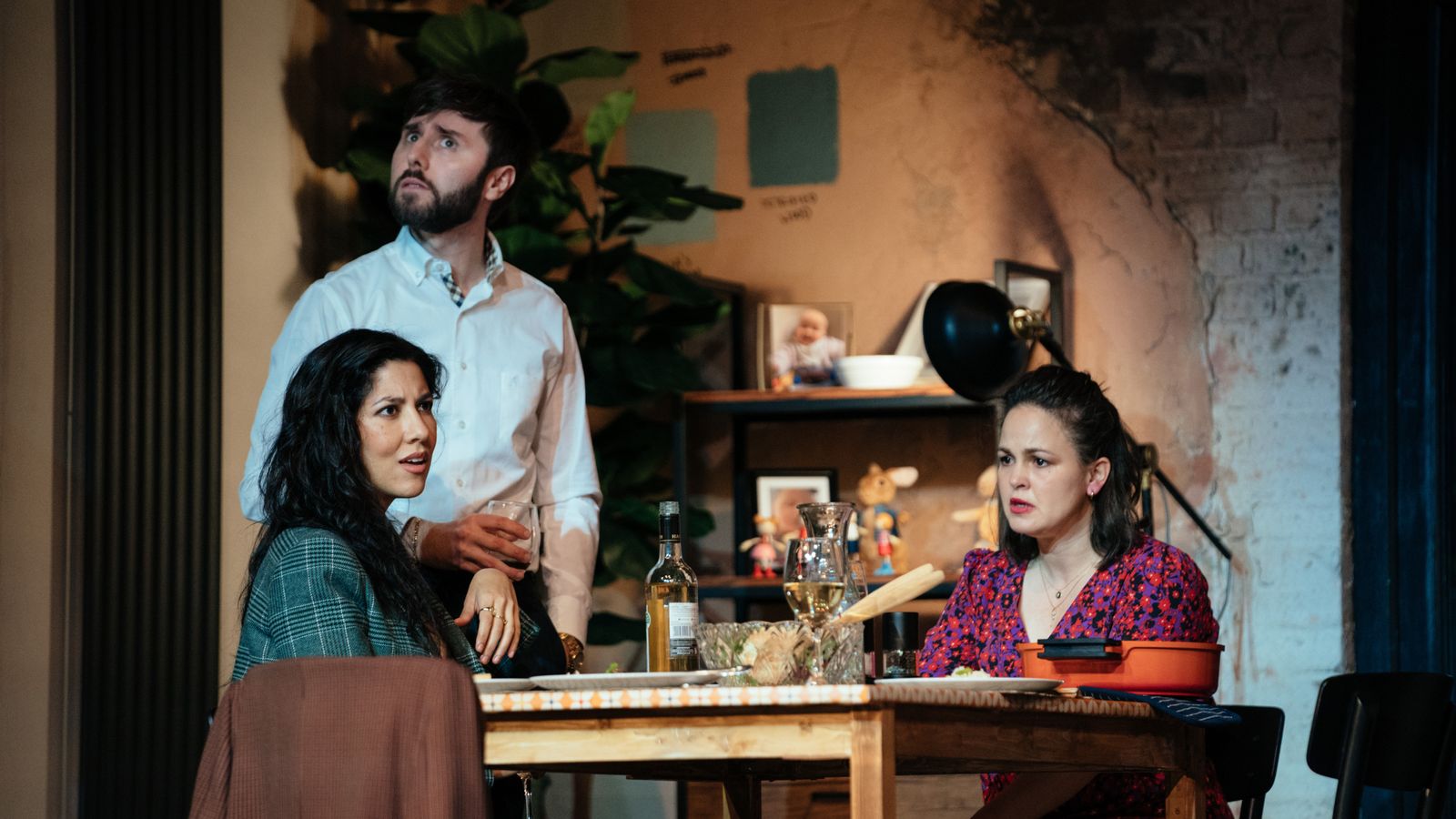 An Inbetweener, a detective from Brooklyn, an esteemed TV actor and the former queen of the I’m A Celeb castle all walk into a theatre.

But there’s no punchline – instead we get a critically-acclaimed supernatural thriller that will spook audiences over the Christmas period.

London’s Gielgud Theatre is home for a second run of 2:22 A Ghost Story, and it stars James Buckley (best known as Jay from The Inbetweeners), Stephanie Beatriz (Brooklyn Nine-Nine’s Rosa Diaz), Giovanna Fletcher (podcaster and best-selling author) and Elliot Cowan (from the likes of Cilla and Apple TV+’s Foundation).

This unlikely, yet fiercely talented ensemble all cite the same reason for wanting to jump on stage and perform it – the writing.

“It’s a page turner,” Cowan explained about the play.

“I went through it twice in about two hours in preparation… and by then I was hooked. I knew I wanted to do it.

Beatriz, who has had a busy year, after appearing in In The Heights, voicing a new Disney character in Encanto and waving goodbye to Brooklyn Nine-Nine, also heaps praise on the story, telling Sky News: “It’s beautiful, it’s funny – it’s like something I’ve never done before.

The story in question sees Jenny and Sam (Fletcher and Cowan) move into a new house – but at exactly 2:22 every night, Jenny hears unusual noises. Determined to prove its a natural occurrence, Sam invites friends Lauren and her boyfriend Ben (Beatriz and Buckley) to stay up with them until 2:22 to see what happens.

It’s been eight years since we last saw Buckley’s Jay in The Inbetweeners (and no, there’s no more planned), but the character is still loved well into the 2020s, thanks to streaming services and the show’s enduring popularity.

Meanwhile, Beatriz stepped away as the gruff-voiced-no-nonsense detective Rosa Diaz earlier this year, when Brooklyn Nine-Nine was brought to an end – a show that has won critical acclaim for years.

Beatriz explains: “The thing about loving a show is that if you really love a show, you usually consume all the seasons that you can of it and so after a while, you’ve known a character for years.

“And so sometimes it can be quite jarring to meet the actor who plays that character in real life, and they’re not really like the character that you built up in your brain.

“I think in that way, I’m excited for people that know our collective work from other places to come and see us in this play because I think that the characters we are playing in this are vastly different from what audiences might know us from.”

For Buckley, he doesn’t think his new stage role will change how fans see him, saying that “I always think that people are up for anything”, but does understand The Inbetweeners’ appeal.

“The character of Jay… is super popular which is absolutely amazing and people really enjoyed when I did that, I enjoyed doing it as well… if people see me as that character, I don’t really have a massive problem with it”, he said.

‘It’s so good to be back’ on stage

It’s hard to talk about theatre and not mention COVID, but as the industry hurtles towards its busiest period amid a renewed threat of restrictions, the cast explain that it is just so good to be back out (safely) performing.

Cowan said: “The last time I was on stage two years ago… I didn’t know at the time that would be my last time for a while. It’s so good to be back.”

“It’s made audiences more responsive,” Fletcher adds, saying: “I think everyone’s just so invested in the fact that they’re at the theatre… the reaction is bigger than ever.”

Cowan also says that while masks (which are now legally required to be worn in theatres) are a “hot bother”, its the trade off required to keep shows on stages.

“It’s not a judgment either way… this is going to close if people are laissez-faire about it.”

Buckley says it is a “relief” for audiences who are able to come and enjoy the show – calling it “just what the doctor ordered”.

“That all adds to the whole experience and if you come and see the show, you will enjoy it, you will have fun – and at the moment, we’re allowed to do that again. So hopefully it will continue.”

2:22 A Ghost Story runs at London’s Gielgud Theatre until 12 February.

Hear what Putin critic thinks could lead to Putin’s downfall
What has Belarus got to do with the Russia-Ukraine conflict?
Bubbles freeze in -50C temperatures
See the chilling video Chinese protester made before her disappearance
‘I was sad for the institution’: Nancy Pelosi speaks out about McCarthy speaker vote