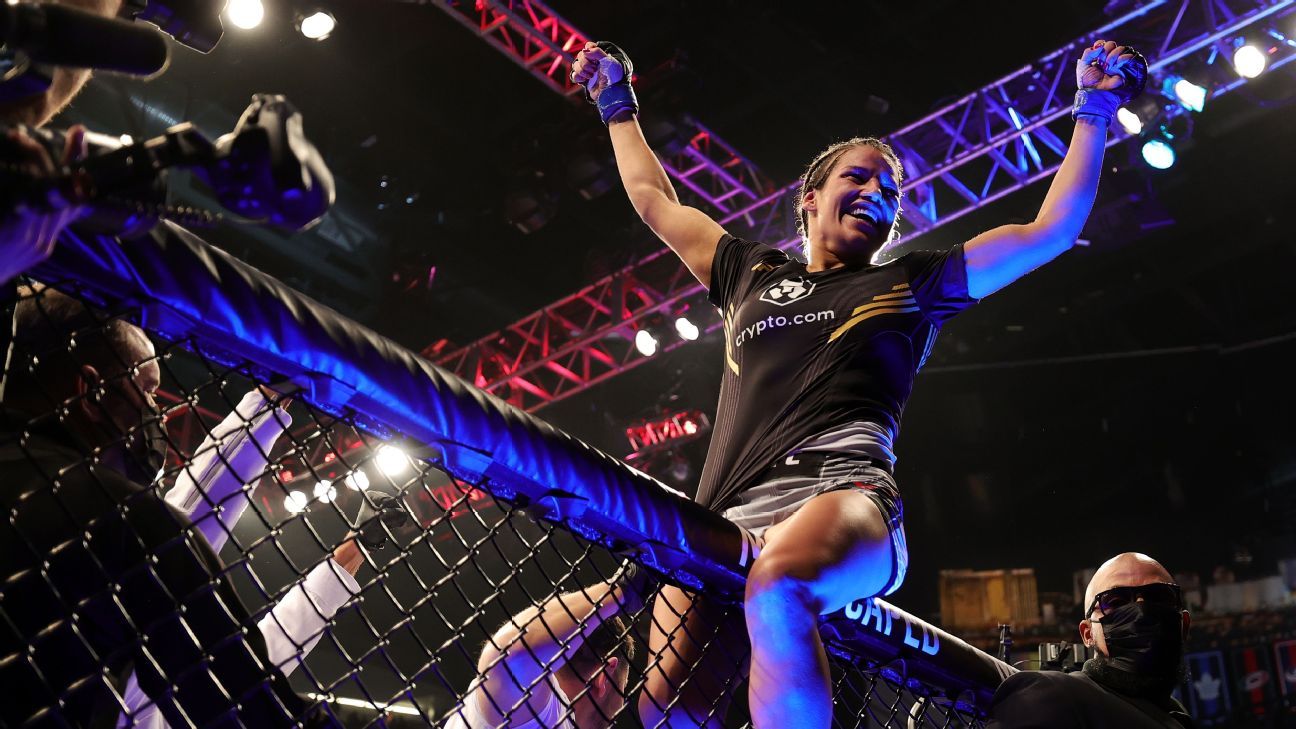 LAS VEGAS — Julianna Peña’s face was blank, and emotionless. She was on her knees and reached over to hug Amanda Nunes. A Nevada State Athletic Commission (NSAC) inspector came over and pointed Peña to her corner, where a ringside physician tended to Peña’s bruised left eye.

Peña had just beaten the indomitable Nunes, the greatest women’s fighter of all time by almost any measure. She had just become the UFC women’s bantamweight champion. She had just shocked the world.

The more than 18,000 people in attendance Saturday night at UFC 269 at T-Mobile Arena knew all of those things. Peña was clueless. She leaned over to ask the doctor what was going on.

“I said, ‘What happened?'” Peña said at the postfight press conference. “He said, ‘It’s over, you’re done. Congratulations.’ I was like, ‘Oh! Gee, I didn’t even know.'”

Peña thought maybe the round had ended and she and Nunes would fight on. She never felt or saw Nunes tap, which she did at 3:26 into the second round. But after talking to the doctor and her longtime coach Rick Little, a smile formed on Peña’s face. And all of a sudden, she started climbing up the cage to celebrate.

That visual will not soon be forgotten. Peña, a +650 underdog per Caesars Sportsbook, ended Nunes’ 12-fight winning streak. UFC president Dana White said the upset was “up there” with Matt Serra‘s stunning knockout of Georges St-Pierre in 2007 among the biggest in UFC history.

How did Peña stunningly become UFC women’s bantamweight champion on Saturday night? ESPN asked several people who had a firsthand perspective of the epic moment to recall what they saw.

Nunes won the first round handily, dropping Peña with a right hand, reversing a Peña takedown attempt and spending the rest of the round in top position on the ground.

Little: “I loved the first round. I loved how it was going. I was worried that [Nunes] was going to run.”

Mike Brown, Nunes’ coach at American Top Team: “The grappling early was a bad idea. I thought it was terrible to go to the ground with [Peña]. In the beginning, maybe [if Nunes didn’t grapple] she’d have [had] the power to get her out of there.”

Peña landed a left hook that got Nunes’ attention 12 seconds into the second round. At 1:00, Peña landed a big combination, her most significant strikes of the fight to that point. She was throwing straight punches, countering Nunes’ looping overhand right.

Michael Chiesa, Peña’s longtime teammate, who was watching from the front row: “Julie was well prepared to handle Amanda’s power. When she came out and went toe-to-toe with her in Round 2, I knew that was the momentum shift where she would take over the fight.”

By 1:40 of the second round, Peña and Nunes were in a full-fledged firefight. Both women were throwing big punches and taking damage. Nunes started to bleed from her nose. Peña’s left eye began to swell.

White: “They were in the pocket there and they were both throwing. [Peña] was definitely landing more. But Julianna’s face was getting busted up, too. Julianna was taking some punches, too.”

Brown: “I said [to Nunes], ‘Calm down. Straight punches. Ones and twos — use your feints.'”

Peña landed two big left hooks at 1:55 of the second round. Nunes’ hands dropped immediately. On the punches, Peña’s mouthguard fell out. Referee Marc Goddard had to retrieve it and put it back in Peña’s mouth. Peña continued to exchange punches with Nunes.

Peña: “You’re on the horse. Don’t get bucked off the horse. We could do this all day. I was comfortable, I was ready. I could see the change in her face. And then I can see my corner, ‘Go, go, go, go, go!'”

Little: “I knew when I saw Amanda, she gave a certain look. She did it in the fight with Cat Zingano and other fights. I’ve seen it. When you fight back, there’s this wobbly look she gives. And you can’t do that with a girl like Julianna. She’s an absolute killer and if you give her the chance, she’ll go after you.”

Nunes landed a big right hand at 2:28, but Peña kept coming. Nunes has knocked out the likes of Cris Cyborg with punches like that, but she couldn’t stop Peña.

Brown: “It looked like [Nunes] was a little out of control. She wasn’t fighting smart at all. She was just brawling. I think she thought maybe in her head that she’s just going to crack her and get her out of there or something. But she was just not setting anything up.”

White: “I thought Amanda looked like she was getting tired.”

Little: “I, truthfully, wasn’t happy with what [Peña] was doing, because I knew at any time we could have took her down there. Once we got Amanda a little bit fatigued, I knew the takedowns would come — easy. Julie took down Sara McMann, an Olympian. … I’m sitting there saying, ‘Get a hold of her.’ [Peña] was just in the moment. That’s all Julianna. You can’t say coaching. That wasn’t the plan. That wasn’t how I wanted her to fight her. I was in the corner on the edge of my seat.”

At 3:01, Peña landed four straight jabs that hurt Nunes. Peña then followed with a big, four-punch combination that pushed Nunes back toward the cage. Peña kept throwing punches and Nunes initiated a clinch to slow things down. Peña pushed Nunes against the cage, landed a knee to the body and took Nunes down at 3:15 with a well-executed trip from the bodylock position. Seven seconds later, Peña had Nunes’ back with Nunes in a turtle position, and wrapped her left arm across Nunes’ neck.

Little: “This sounds crazy, but we have a choke we’ve been working on and I knew if [Nunes] gave up her back, it was gonna be a wrap. It’s a hybrid rear-naked choke and it cuts your throat, man. It’s nasty. It’s a nasty windpipe choke. If you’re sucking wind, it’s bad. It feels like your head is going to pop off. … We’re tearing at the chin and the choke is more elongating the neck than choking the next. We want forward pressure. The choke was perfect.”

With Peña choking her and neither of Peña’s legs hooking the inside of Nunes’ legs like a traditional rear-naked choke, Nunes leaned her head down toward the mat. Peña continued to squeeze and Peña tapped at 3:26.

Peña: “I saw her leaking [blood] from her nose a little bit and I put the choke on, but I wasn’t sure. I didn’t realize that she tapped. I remember when I took her down, I thought, ‘Man, I wish somebody could tell me how much time I have left in the round.’ Because I didn’t know how much time was left. And then after that, the ref picked me up and they threw me in the corner.”

Chiesa: “When Julie finished Amanda, I was obviously overwhelmed with happiness. It was a very emotional moment for me. I know all the trials and tribulations she’s been through to get to that moment. That finish was an accumulation of her 14 years [of training] she’s dedicated to this sport.”

After talking to the ringside physician and then Little, Peña knew for sure she had done what many deemed impossible. She had become champion — something she has been saying she could do since 2016. Nunes, meanwhile, was tended to by a doctor and met in the cage by her wife Nina, a UFC women’s strawweight fighter.

Then the celebration began.

Brown: “I think [Nunes has] had a lot of pressure for a long time and I think maybe she feels a little relief now. I think she was in that mode a little.”

Little: “This is so crazy. Me and [Peña] started [training] in a garage. To be honest, it still hasn’t sunk in. It doesn’t feel real yet. I’ve heard people say that and I didn’t understand it. But it doesn’t feal real and it hasn’t sunk in.”

White: “We’ve seen it so many times. Anything is possible in this sport.”

Peña: “Amanda has been such a great champion. She’s done a ton for the sport. For me to be able to take out arguably the greatest of all time … is something that is still sinking in right now.”