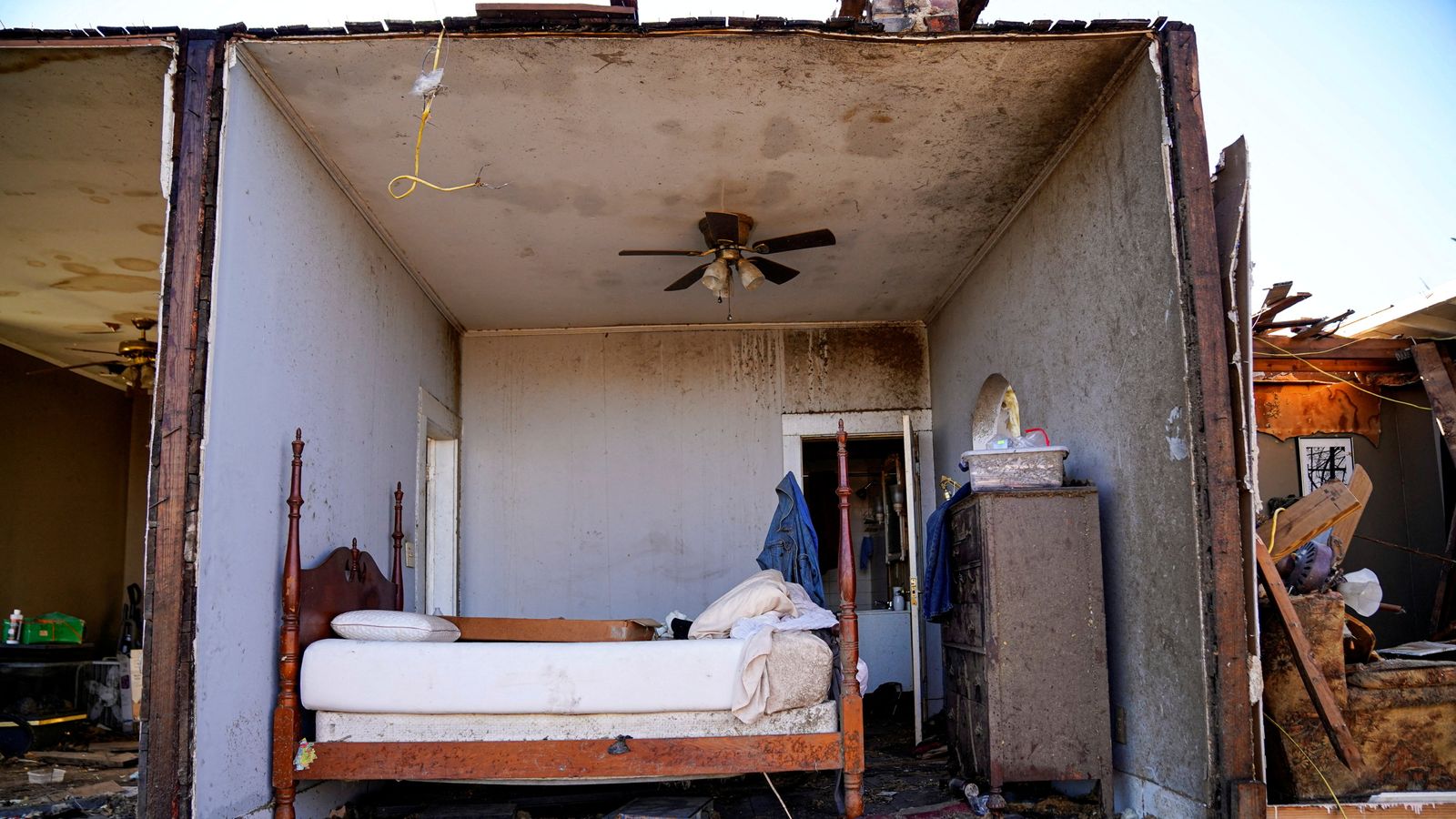 Residents of the US states affected by some of the most devastating tornadoes ever recorded have been describing the moment the storms hit and the impact they have had on their communities.

Up to 100 people may have been killed and President Joe Biden has pledged to “provide whatever is needed” for those badly hit by Friday’s disaster.

Nothing left but ‘a slab and two steps’

Teresa Willis, 29, a resident of the Kentucky town of Mayfield, said her great aunt was found dead in the aftermath of the storms.

“For me not to be able to help my family member is horrible,” she said, after viewing what remained of her aunt’s house.

“There’s no furniture. There’s no clothes. There’s nothing remaining of her house but a slab and two steps,” Ms Willis said.

Atmosphere after storm compared to a ‘twilight zone’

Another Mayfield resident, Autumn Kirks, said she and her boyfriend Lannis Ward were about 10ft (3m) apart in a hallway when someone said to take cover. Suddenly, she saw sky and lightning where a wall had been, and Mr Ward had vanished.

“I remember taking my eyes off him for a second, and then he was gone,” she said.

Later in the day, Ms Kirks received the news that Mr Ward had been killed in the storm.

“It was indescribable,” Pastor Joel Cauley said of the disaster scene in the community.

“It was almost like you were in a twilight zone. You could smell the aroma of candles, and you could hear the cries of people for help. Candle smells and all the sirens is not something I ever expected to experience at the same time.” At least 48 people have died after a powerful tornado hit the US state of Kentucky.

‘We need a miracle’

Johnny Shreve had been watching the storm approach from his window in Mayfield.

He saw an office building across the street disintegrate. Then he dived on to his kitchen floor as chunks of concrete pelted his body.

“It felt like everything in the world came down on me,” he said.

He lay there for more than an hour, trying to dig himself out and shouting for his neighbours and his Shih Tzu, Buddy.

Finally, Mr Shreve broke through into the living room. There was Buddy, trying to scratch towards him from the other side.

He posted on Facebook that they were alive, and added: “Y’all pray for Mayfield.”

“It blew my mind when the sun came up,” Mr Shreve said, when he and others returned over the weekend to salvage what they could and shared stories of survival.

“I don’t see how this town can recover. I hope we can, but we need a miracle.”

It ‘sounded like a freight train going through a brick house’

Also in Mayfield, Laurie Lopez, 53, received a tornado alert on her phone about 20 minutes before her whole house started shaking.

She took cover in a hallway with her 19-year-old daughter and their two Huskies.

“Soon the (window) glass … just burst in. We could hear it flying. I have it like all over my bedroom,” she said. The
tornado “sounded like a freight train going through a brick house”.

“I was in the middle of it, just trying to pull the pieces together now,” said Rick Foley, 70, who survived the storm crouched in a doorway inside his home.

Before and after satellite pictures show extent of destruction

Employees from an Amazon plant in Edwardsville, Illinois, said they had been directed to shelter in bathrooms by managers after receiving emergency alerts on mobile phones from authorities.

“I was at the end of my route. I was just getting in the building and they started screaming, ‘Shelter in place!'” said
David Kosiak, 26, who has worked at the facility for three months.

“We were in the bathrooms. That’s where they sent us.”

“It sounded like a train came through the building. The ceiling tiles came flying down. It very loud. They made us shelter in place until we left – it was at least two and a half hours in there.”

Taiwan: Live radio chatter between fighter jets reveals tension
Hear what investigators found inside Idaho suspect’s home
What has Belarus got to do with the Russia-Ukraine conflict?
Exclusive: China ‘likely’ to invade Taiwan in 2027
Child prodigy may make Grammy history