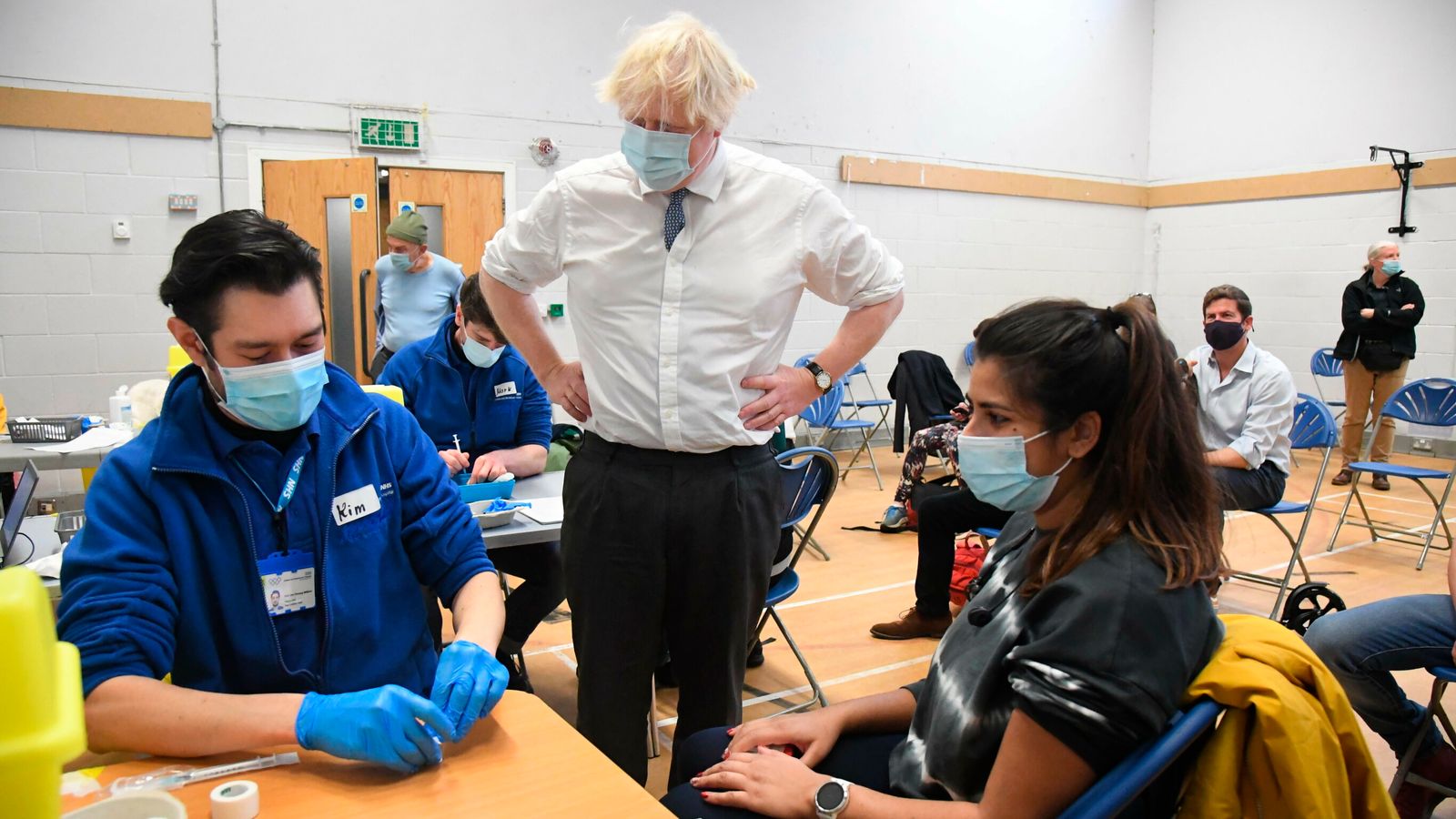 Boris Johnson is facing the biggest Tory rebellion since the 2019 general election in a bitter Commons showdown with many of his own MPs over his Plan B COVID rules.

Nearly 80 Conservative backbenchers have signalled they are prepared to vote against new regulations on face masks, isolating, vaccine passports and compulsory vaccinations for NHS staff.

Sir Keir Starmer has pledged Labour support for the measures, so there is no danger of a government defeat. But a huge backbench rebellion will be a humiliating blow to the prime minister’s authority.

Mr Johnson also faces the threat of up to 10 junior members of the government, the unpaid Parliamentary private secretaries who act as ministers’ bag carriers, resigning so they can vote against the new rules.

Coinciding with the battle in Parliament, after the government warned that the new Omicron variant is currently infecting 200,000 people a day across the UK, the PM is appealing for a volunteer army to sign up to help deliver his target of a million boosters a day, including 24-hour centres and jabs on Christmas Day. 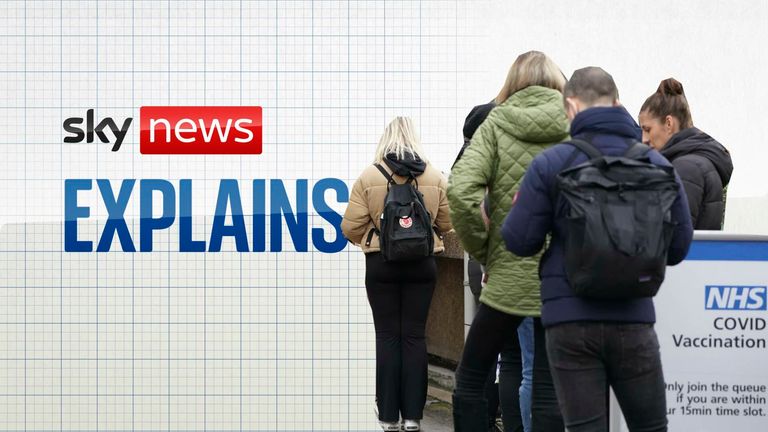 In the Commons, after a six-hour debate MPs will vote on four new regulations: on face masks, isolation rules, COVID passes and NHS compulsory vaccinations, of which the COVID passes are the most fiercely opposed by the Tory rebels.

The latest MP to join the rebellion, “Red Waller” Jo Gideon, whose majority in Stoke on Trent Central is just 670, tweeted: “I will be voting against the introduction of vaccine passports on Tuesday. Their effectiveness is unconvincing and the impact on our hospitality industry and major events businesses, who have already had to sacrifice so much, would be unjustified.”

Henry Smith, a Boris Johnson loyalist, told Sky News: “I think they are a further erosion of civil liberties. I think they will do damage to our economy and it’s a further distraction from the other health conditions that the pandemic has distracted us from.”

What are the vaccine certificate rules MPs will be voting on?

And former Cabinet minister Dr Liam Fox told Sky News: “Where I have a problem with the government making it crime for venues to not do this.

“It’s never been part of our ethos in the UK to threaten people with criminal sanction if they don’t comply with these issues.

“I think we’ve got to be careful to not set a precedent of making people criminals for these issues, when it’s really a public health issue.”

The biggest Tory rebellion against Mr Johnson until now was over the tier system of COVID restrictions a year ago when more than 50 Conservative MPs voted against the government and many more abstained.

Relying on Labour votes to pass measures deeply unpopular with his MPs is likely to inflict further damage on the prime minister’s already-fractious relationship with his disgruntled back benchers.

Many Conservative MPs are furious with the PM over the allegations of partying inside 10 Downing Street last Christmas and the row over who paid for the lavish makeover of the PM’s flat.

Labour to back government over new rules

Despite backing the new rules, the Labour leader has said government ministers should have acted sooner in the face of the threat from the fast-spreading Omicron strain.

“We may not be certain how dangerous it is but we do know that lives are at risk and again our NHS is at risk of being overwhelmed,” he said in a televised address responding to the PM’s Sunday night booster announcement.

“If that happens more people will die. So we must do everything that we can to protect the NHS.”

And in a thinly-veiled attack on the prime minister over the Downing Street party allegations, Sir Keir said: “At times like this, we must all put the national interest first and play by the rules.

“Of course I understand that sticking to the rules can be inconvenient but stick to the rules we must. It would be easy to let the festivities we’ve all been looking forward to, divert us from our national duty.”

Ahead of the Commons votes, the PM has joined forces with NHS Chief Executive Amanda Pritchard to issue a rallying cry for thousands of volunteers to come forward and support the NHS booster campaign.

The public will be urged to play a crucial role in the UK’s fight against Omicron by helping the NHS to get as many jabs into arms as quickly as possible. No task will be too small to contribute towards this national effort.

“As part of our Get Boosted Now vaccination drive we need to increase our jabbing capacity to unprecedented levels,” said Mr Johnson.

“But to achieve something on this scale, we need your help. So today I’m issuing a call for volunteers to join our national mission to get jabs in arms.

“We need tens of thousands of people to help out – everyone from trained vaccinators to stewards.

“Many thousands have already given their time – but we need you to come forward again, to work alongside our brilliant GPs, doctors, nurses and pharmacists, to deliver jabs and save lives. So please come forward if you can.”

Ms Pritchard added: “In the face of the grave threat posed by the new Omicron strain of Covid, the NHS is seeking to offer vaccine booster protection to all eligible adults by the end of the month, a new national mission in which everyone can play their part.

“There is no doubt that our incredible NHS staff will rise to the challenge but we cannot do this alone – we need the support of the public and volunteers to once again support the COVID vaccination programme.”

The government says there are now almost 3,000 vaccine sites across the country, staffed by over 90,000 volunteers who have given up 1.1 million hours of time so far.

In the next week hundreds more sites, mobile units and pop ups will be springing up across the country. These will be in a range of locations that will make it as easy as possible for people to get boosted – such as at football stadia, shopping centres and racecourses.

This means volunteers are needed to perform tasks such as registering patients, managing queues and giving jabs.

Last week the NHS announced a recruitment drive for 10,000 paid vaccinators and support staff and that it will also work with the Royal Voluntary Service and St John Ambulance to recruit a further 40,000 volunteers for roles such as admin and stewarding queues.

In the last week, 13,000 people have come forward as steward volunteers, and a further 4,500 people have registered their interest to take up one of the 10,000 paid vaccinator roles. The government and NHS now want to go even further.