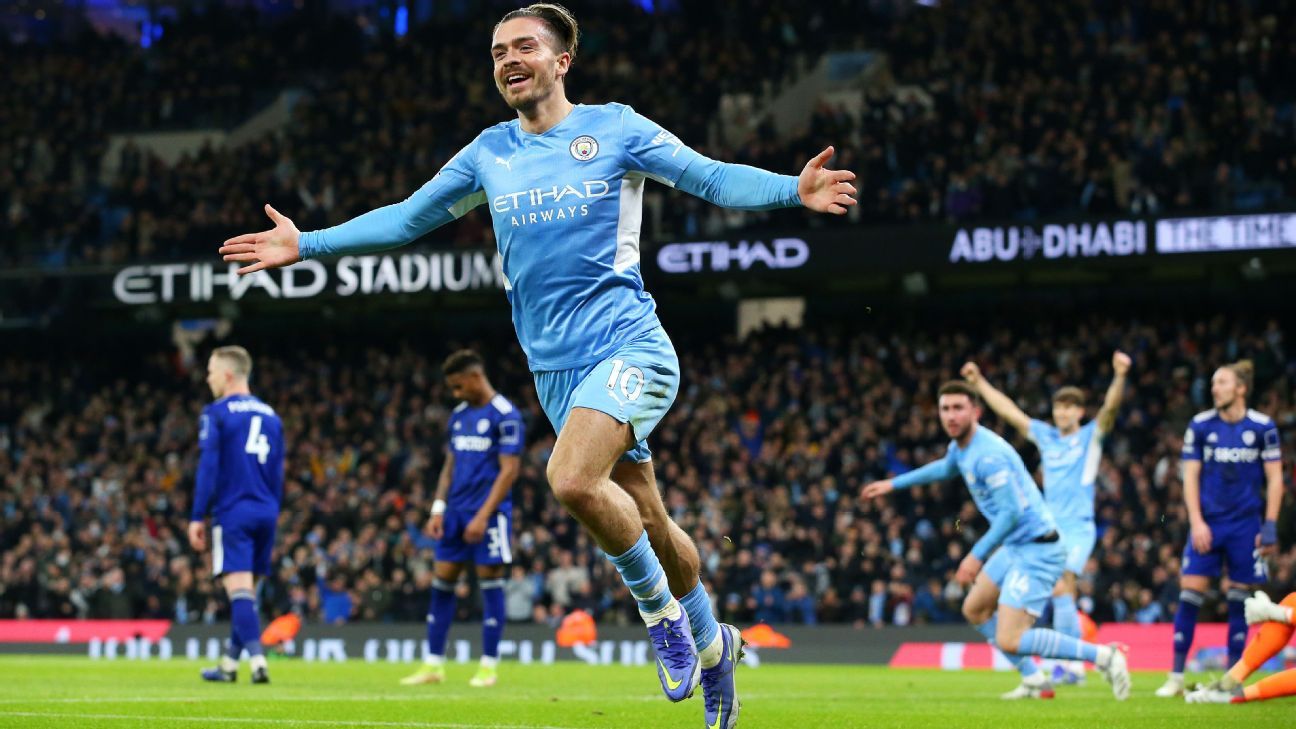 MANCHESTER, England — Manchester City enjoyed themselves against Leeds United on Tuesday night, and so did Jack Grealish.

Pep Guardiola’s side were 3-0 up after half an hour at the Etihad Stadium, eventually winning 7-0 to move four points clear at the top of the Premier League table.

A seventh league win in a row, it was the type of performance that showed why City are still favourites to win the title ahead of Liverpool and Chelsea.

Grealish, meanwhile, offered up a reminder about why they were willing to part with a British record £100 million for his services.

By his own admission, it’s not been an easy start to life in Manchester after leaving Aston Villa in the summer. Things haven’t always seemed to come as easily as they did at his boyhood club but against Leeds the swagger was back.

He scored City’s second of the night and could have had more.

By the middle of the second half, Leeds had resorted to kicking him as high into the air as they could only to see him jump back up, collect the ball, and burrow forward again and again.

He was a central part of a City display that ranked among the very best of Guardiola’s reign and with it proved beyond any doubt he belongs at this level.

“He was exceptional,” Guardiola enthused after the match. “I don’t judge players for their goals. I want to see how they behave and their decisions.

“Congratulations to the team, it was a good performance for us.

“We did a good performance, the vibes of the stadium was nice today — it was sold out and the supporters were incredible.

“We did a really good game. We dropped five points against Leeds last season with the same guys and we can not forget it.

“When you get these results it’s because individually they [the players] are brilliant.”

It’s a sign of how Grealish’s first four months at City have gone that it wouldn’t have been a huge surprise had he been left out against Leeds.

It’s not that he’s been bad; more that he’s competing with Kevin De Bruyne, Bernardo Silva, Riyad Mahrez, Phil Foden, Raheem Sterling and Gabriel Jesus and any dip in form is amplified because others, usually, are playing well.

Substituted early against Wolves on Saturday, and at Watford a week earlier, Grealish might have feared the worst when Guardiola came to name his team against Leeds, but he was given another opportunity and took it.

As early as two minutes in he was flying forward, dazzling Luke Ayling with a couple of step-overs before smacking a low shot at Illan Meslier. Two minutes later he bounced a pass off De Bruyne on the edge of the box and almost got on the end of the return.

It is the type of thing Guardiola wants to see more often. His system can be quite rigid, but Grealish has been reminded more than once there is still freedom within the structure. The boiled down message has been to keep doing the things he did so well at Villa and Guardiola’s idea isn’t to squeeze the life out of the England midfielder, rather to get him in better areas more often.

Against Leeds, it worked and for large parts of the game — Marcelo Bielsa’s team couldn’t cope.

It was a night of eye-catching runs and touches, but Grealish’s best moment came in the 12th minute. A City corner ended up back at the feet of Mahrez and when the Algerian whipped a cross into the box, Grealish was there to head in from six yards out to score his first league goal since August.

It was a striker’s goal from a team without a striker.

By then it was already 1-0 after Foden had scored City’s 500th Premier League goal under Guardiola in just 206 games. There were five more before full-time from De Bruyne (2), Mahrez, John Stones and Nathan Ake and yet Leeds walked off looking relieved it wasn’t 10.

Bielsa said afterwards his team “had never played so badly in these four years.”

Only five points above the relegation places, their safety this season isn’t guaranteed and a brutal night in Manchester will do nothing for their confidence ahead of back-to-back games against Arsenal and Liverpool.

While Biesla said there “was nothing to take away from the game,” there were plenty of positives for Guardiola.

He will, as always, value the overall dominance of his team more than any individual performance but, after all the questions about Grealish since his move, there will have been a quiet satisfaction in seeing him look so at home as a key cog in that familiar, slick machine.

Back in the dressing room after the final whistle, Grealish went on Instagram to post the message “perfect night at the Etihad.”

It was hard to argue with his assessment.

Huge humpback whale washes ashore in New York
CNN reporter has close call with Russian missile
‘We believe Nicola sadly fell into river’
Tiny, radioactive capsule went missing. See where it was found
Why is the UK economy predicted to perform so badly?