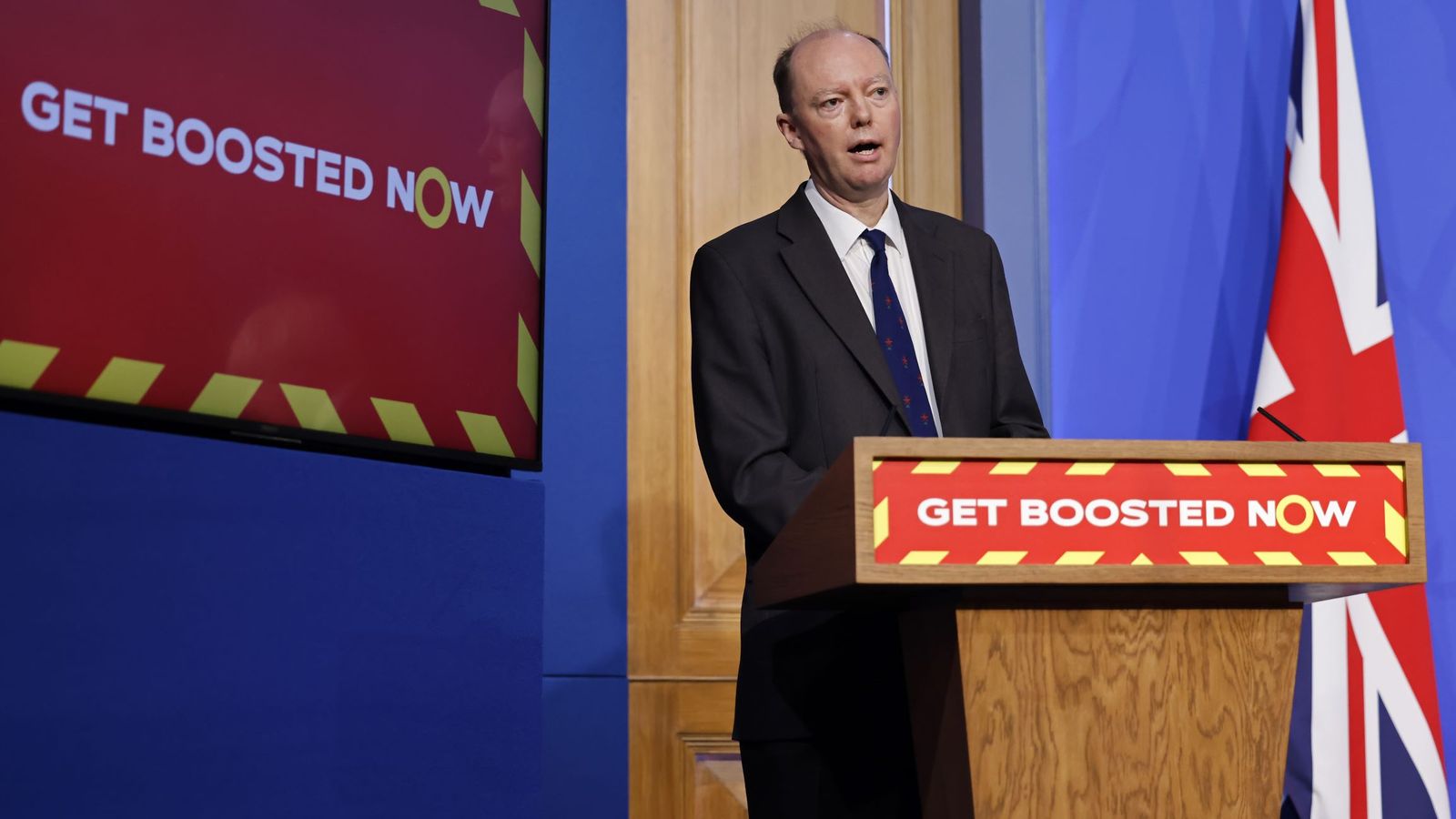 Large numbers of COVID patients ending up in hospital is a “nailed on prospect” as the Omicron variant spreads at an “absolutely phenomenal pace” across the country, England’s chief medical officer has warned.

On Wednesday, the UK recorded its highest number of daily COVID cases since the start of the coronavirus crisis, with 78,610 fresh infections.

Prof Whitty said that daily COVID case records “will be broken a lot over the next few weeks as the rates continue to go up”.

And he also warned that these would translate into “big numbers” being treated in hospital in the coming weeks.

“I’m afraid there will be an increasing number of Omicron patients going into the NHS, going into hospital, going into intensive care,” Prof Whitty said.

“The exact ratios we don’t yet know, but there will be substantial numbers and that will begin to become apparent, in my view, fairly soon after Christmas.

“It will start before then but, in terms of the big numbers, I think that’s a reasonably, I’m afraid, a reasonably nailed on prospect.”

Prof Whitty said the UK faced “a really serious threat at the moment” and suggested that Britons should “deprioritise” certain social contacts.

He added there were “several things we don’t know” about the Omicron variant, but warned: “All the things that we do know are bad.”

“The principal one being the speed at which this is moving,” Prof Whitty said. “It is moving at an absolutely phenomenal pace.”

Prof Whitty suggested there were “two epidemics on top of one another” following the spread of the Omicron variant.

He said the spread of the existing Delta variant was “roughly flat” but there was a “very rapidly growing Omicron epidemic on top of it”. WHO envoy on Omicron: ‘This is unprecedented’

Dr David Nabarro, special envoy on COVID-19, later told Sky News that this is a “very serious situation” and he has “never been more concerned that I am tonight” at any other point in the pandemic.

“We have enough information in the World Health Organisation to indicate very clearly that this spreads super fast with a doubling time of numbers of cases every two to three days,” he said.

“We’re concerned that people are dismissing Omicron as mild. Even if Omicron does cause less severe disease the sheer number of cases will once again overwhelm health systems.”

The 78,610 COVID cases recorded on Wednesday was over 10,000 more than the previous daily record of 68,053 infections, which was reported on 8 January this year.

A further 4,671 cases of the Omicron variant were also confirmed on Wednesday, almost doubling the total in the country and bringing it to 10,017.

On Wednesday, a further 165 deaths within 28 days of a positive coronavirus test were reported. This time last week, 161 deaths were recorded.

In the latest 24-hour period where figures are available, another 774 COVID patients were admitted to hospitals in the UK – with the total now 7,673, including 896 on ventilators.

This is slightly up from the same time the previous week when 738 patients were admitted.

Ukraine War: ‘This is such a stupid tank’: Commander’s plea for modern tanks on Bakhmut frontline
What is the UN Security Council?
What has Belarus got to do with the Russia-Ukraine conflict?
Ukraine Invasion: All the latest developments
Exclusive: China ‘likely’ to invade Taiwan in 2027