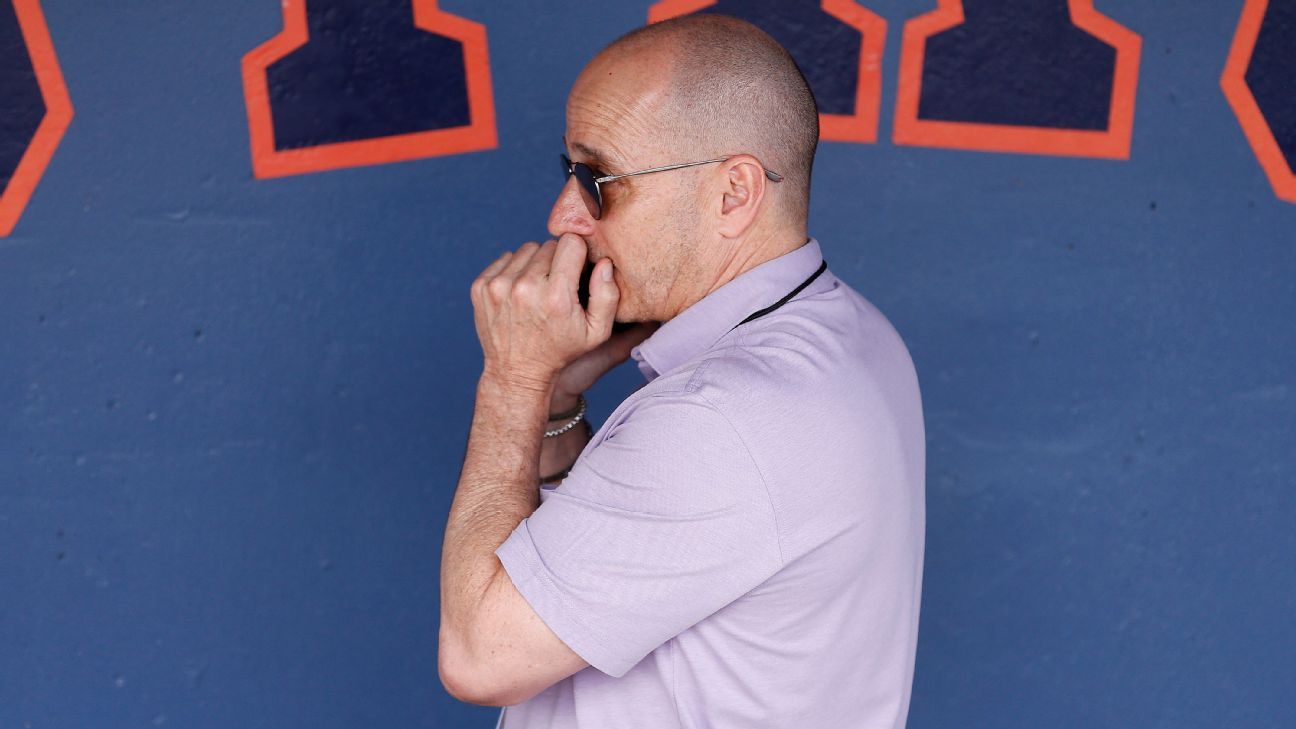 During the lockout, Major League Baseball personnel notably cannot speak with their major league players — not about free agency talks, rehab assignments, or spring plans. That gag order extends to the press, too — and early evidence shows that it has been effective, with some staffers mentioning fears of having their phone records checked. One executive reached out through his spouse’s cell phone. “Sorry,” he said, apologizing for the unfamiliar number, “I’m just trying to be careful.”

It might be harder to talk about than usual, but underneath the transactional and information blackout, there is a lot going on.

Normally, personnel movement in MLB front offices and field staffs occurs in October and November, with teams conducting interviews for newly created vacancies, all the while jousting to keep their on-field talent in the face of overtures from other teams. But this offseason has been unlike any other in baseball history. The looming expiration of the collective bargaining agreement on Dec. 1 compelled teams to place an early focus on player acquisition, every would-be contender speed-dating with all of the most coveted free agents. Just about every team feasted at the trough of trades and signings before the owners initiated their lockout of the players’ union. Executives didn’t have the time to focus on the hiring of, say, a minor league field coordinator.

But now, contact with players has been shut down, and teams are neck-deep in those deferred conversations about filling staff vacancies. The Athletics and Mets, for example, are picking managers and coaching staffs. The Astros have to decide how to replace esteemed pitching coach Brent Strom, who landed with the Arizona Diamondbacks. The Cleveland front office has been raided, again.

Even those teams who have complete staffs have been busy: Some executives are already going through the early preparation for the moment when the labor shutdown ends and the resumption of signings and trades is greenlit. Whether that happens in February or March, or later, most teams believe it will kick off another unprecedented lightning round of activity, with perhaps 200 players on the move within two to three weeks after the next CBA is forged.

Here’s some of what is percolating among the teams:

The choice that new general manager Billy Eppler must make — with the approval of owner Steve Cohen — in hiring a new skipper for the Mets is effectively between choosing an established manager with experience running a team in the big leagues (more specifically, a team in New York), or one of two promising but unproven younger options. As for the latter: Rays bench coach Matt Quatraro, who is so highly regarded in the industry that it’s inevitable he’ll get an opportunity somewhere, and Astros bench coach Joe Espada, whom Eppler knows from the days when both were with the Yankees. But Buck Showalter, who has his second interview with the Mets on Friday, is seen as a favorite because the organizational mandate is to win now, especially following Cohen’s whopping injection of cash into the major league roster, in the form of Max Scherzer, Starling Marte, Mark Canha and Eduardo Escobar.

The Mets will have to round out Showalter’s coaching staff, allowing Eppler to finally have a chance to focus on some of the team’s infrastructure. In a way, the timing of the labor stoppage “couldn’t have worked out better for Billy,” said a rival executive, “because now he’s got some time to catch up on all the other stuff that needs to get done.”

The Astros should soon officially announce the hiring of Sara Goodrum as their new director of player personnel; Goodrum had been the Brewers’ minor league hitting coordinator. Josh Miller is the new pitching coach, with Houston also adding Bill Murphy to help with the pitching — but it’s possible Houston will hire someone else as it sorts out the responsibilities that Strom left behind. Ehsan Bokhari left the Astros to join the Cubs, and now Houston will pick somebody else as director of research and development.

The Astros had some interesting threads left over from the rapid-fire player movement that occurred at the end of November. MLB made an exception last week to finalize Houston’s two-year, $50 million agreement with Justin Verlander, even though it wasn’t approved before the shutdown — delayed, according to industry sources, by an administrative hold-up by the league. The Astros have been keenly aware of the progress made by the future Hall of Famer as he rehabilitates from Tommy John surgery for the past year, so, contrary to some rumors, his medical condition was not the issue that prevented the deal from being finished.

Houston might be the most motivated buyer remaining in the shortstop market, so it stands to reason the Astros continue to do due diligence on the two best shortstops remaining, Carlos Correa or Trevor Story. Their history with Correa is complicated, of course, because he has turned down two offers in the past year. Separately, owner Jim Crane has assured others in the organization he is not interested in extending an offer beyond six years. According to one source, Correa was offered a $275 million deal by the Tigers, spread out over 10 years. If Correa can’t find an offer similar to the $300 million-plus agreements of Francisco Lindor and Corey Seager, it’s possible that he and the Astros could explore a shorter-term deal with a higher average annual salary — say for $35 million a year — with an opt-out after two years.

We’ve got the latest on MLB’s first lockout since 1990 — plus where things stand on the (currently frozen) free-agency front. Full coverage »

• FAQ: Everything you need to know about MLB’s lockout »

The Cleveland baseball team’s front office is typically treated as fertile ground by other organizations, which means it is raided seemingly annually. The Guardians have been hit with about 50 permission requests from other organizations since the start of this offseason, including that one that led Carter Hawkins to be hired away as the Cubs’ new general manager. The Guardians have spent recent days refocusing on closing the gaps created by departures, using a combination of promotions, advancements, and of course, a search for new front-office talent.

Meanwhile, manager Terry Francona — who missed much of the past season because of persistent health problems — continues to make progress and remains on track to return in 2022. Francona will have one more procedure on an ailing toe later this month, with the full expectation that he’ll be good to go whenever spring training opens.

It’s possible that Quatraro will be hired elsewhere, but generally speaking, the Rays’ staff is stable. This month, the Rays’ front-office execs intend to take the time to get their player evaluations in order and to prepare for the end of the shutdown. With so many unsigned free agents and the avalanche of player movement inevitable, the Rays — like other teams — have talked internally about being in the best position possible to react quickly to acquisition opportunities, as needed.

Managing payroll is a constant challenge for the Rays, given the front office’s budget limitations, and before the trade deadline, Tampa Bay was engaged in talks with the Phillies (and perhaps other teams) about center fielder Kevin Kiermaier. The Gold Glover is the highest-paid player on the roster, set to make $12.16 million in 2022 (with a club option for 2023), and if the Rays are going to capitalize on his remaining trade value — while also trimming payroll — then the best time to move him will likely be in spring training.

Keep up with the latest moves, grades and analysis — all in one place — from the first half of baseball’s 2021-22 hot stove season. Tracker »

The Yankees still have not formally announced the entirety of Aaron Boone’s coaching staff, and during the lockdown, there will be an internal effort to get all the front-office and staff contracts in order.

The Yankees surprised a lot of other teams by mostly sitting out the rush of big-dollar signings in late November, but there are player agents who continue to believe that once baseball business is reopened, Hal Steinbrenner’s team will be among the more aggressive teams — and in particular, might revisit conversations with the representatives of Correa and Story. In the meantime, the team is presumably starting to prepare a strategy for the flood of moves that could come after the CBA agreement — which is particularly important for New York and MLB’s other biggest spenders.

There’s a reason that the Yankees, Dodgers and Red Sox all treated the market very carefully last month — with L.A. taking an unsuccessful run at re-signing Seager, and the Red Sox engaging on Kevin Gausman and Robbie Ray. The perception of some player agents is that because the Yankees, Dodgers and Red Sox all navigated above and below the past competitive balance tax threshold, those teams would prefer to know the exact terms of the next CBA before committing big dollars. (It’s unclear whether Trea Turner will remain with the Dodgers beyond the fall of 2022, when he’ll be eligible for free agency, and some player agents believe it’s possible that L.A. could now turn to either Story or Correa.)

Retired general explains why tanks are so significant on the battlefield
China’s North Pole plunges to freezing temperatures at -53C
Memphis ‘Scorpion Unit’ under scrutiny after Tyre Nichols’ death
Ukraine Invasion: All the latest developments
NHS Crisis: 27 hours for a bed