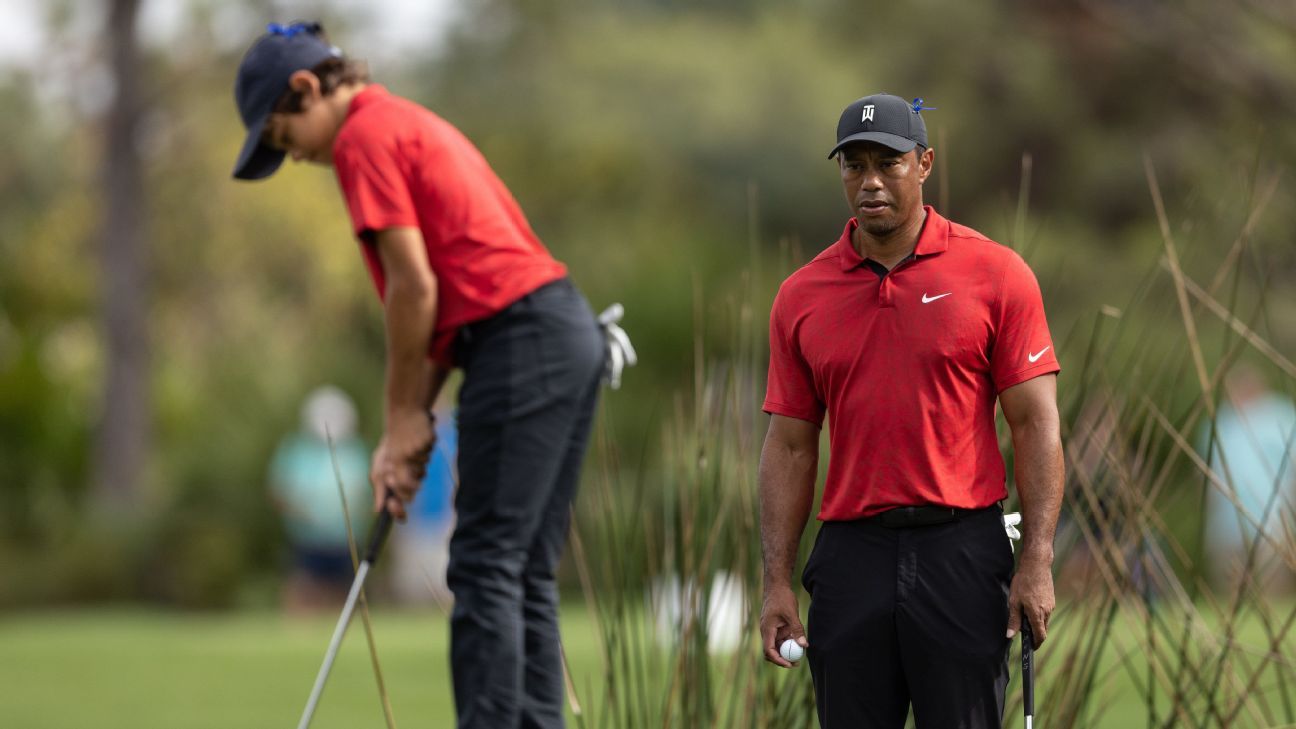 ORLANDO, Fla. — Not quite sure exactly how this week would play out, Joe LaCava decided to get to Florida a few days early. After a year of virtual inactivity, the caddie for Tiger Woods wanted to get out of the house. Playing some golf with his son, Joe Jr., and soaking up some sun made all kinds of sense.

For the first time in a year, LaCava was back where he felt best, inside the ropes with Woods and feeling at home. He knows moments like this past weekend at the Ritz-Carlton Golf Club might be fleeting.

“I’d like to do this more than once a year,” he joked.

The sad reality, of course, is that the next time he and Woods are together in a formal working relationship setting could be awhile. As good as Woods looked at the PNC Championship this week playing with his son, Charlie — and finishing second by two shots to John Daly and his son, John II — the reality is that he is nowhere close to being ready to compete in PGA Tour events.

The swing looks great, the speed will return, but one of the basic concepts associated with the game — walking — is going to take some time. Woods knows it. LaCava can see it, too, even though he was happy to witness so many smiles, so many good shots, especially during a Sunday effort that got far more competitive than anyone thought it would.

“Obviously, physically you can see he’s in a lot of pain. He’s not even close to being there yet, to be able to walk a golf course and play at that level. But in terms of the golf, not all bad. He doesn’t have the speed and the strength back yet. JT [Justin Thomas] was hitting it 30, 40 [yards] past him at times [on Saturday]. But I think that’ll come when he gets some of his stamina back.”

LaCava did get to ply his craft a few times in 2021 while Woods was recovering from the car-crash injuries that made golf an afterthought. LaCava twice caddied for his old boss, Fred Couples, on the PGA Tour Champions. He was an emergency replacement caddie for Patrick Cantlay at the Northern Trust. He noted, with self-deprecation, that it is the only FedEx Cup playoff event the PGA Tour’s player of the year did not win.

It was another light season for what was supposed to be his 11th year caddying for Woods, going back to the fall of 2011 when Woods coaxed LaCava away from Dustin Johnson. LaCava had an easy answer for why he left Johnson for Woods — “It’s Tiger Woods.”

It is difficult to imagine anyone being more loyal. Woods has plenty of people in his camp who have stood by him through various tough times, but LaCava did so despite overtures from plenty of other players who would have gladly brought him on and allowed him back into the arena he loves.

But LaCava always politely said no. He took on those gigs this summer simply to keep busy and as a favor. But there was never any known effort for him to move on from Woods.

LaCava stood by as Woods missed all of the 2016 and 2017 seasons. He made the triumphant return through 2018-19, then saw another limited schedule in 2020 due to the pandemic and Woods’ own back issues resurfacing, which led to another procedure a year ago.

Charlie Woods hits a fantastic drive in the PNC Championship and then echos his dad with a club twirl after.

After that procedure, everyone was waiting to see what was next — though soon none of that mattered. The Feb. 23 car crash rendered any golf talk meaningless. The fact that Woods competed this weekend in a limited capacity is simply remarkable.

LaCava said he twice spent a week with Woods in Florida this past year — once in April and another time in late July. The idea was to simply provide friendship and support. For the April visit, Woods was more or less bedridden, with very little mobility at that point.

The leap to this point has been staggering.

“In terms of hitting shots and all that stuff, he’s not that far away,” said Thomas, who played with Woods at home and during the first round here on Saturday. “But in terms of being able to compete and walk 72 holes multiple weeks in a row, yeah, that’s a different story and he’s the only one who can answer that.”

So far, Woods’ answer to that is he is not close. How close will remain a mystery. Woods said after the final round Sunday that a lot of work is ahead, although he seemed poised to take it on.

Lee Trevino, the 82-year-old legend who has played in this tournament for a quarter century, held an impromptu practice session with Tiger and Charlie after Friday’s pro-am and seemed to suggest he gleaned some insights from Tiger — none of which he would share.

“I know when he’s going to play and when he’s not,” Trevino said. “He already told me all that stuff. He and I are good buddies. I’ve known him since he was 8 years old. Appreciate him very much. I know what he’s going through. I’ve gone through these back operations and stuff. Whatever time limit you give him, he’ll beat it.”

Charlie Woods sinks the eagle on the third hole on Sunday’s PNC Championship.

The conjecture now will be unrelenting.

When will Tiger return? Will he post videos of his swing, of walking the Medalist course where he plays? Is the Masters too soon?

“Everybody wants to talk about Augusta but that’s the toughest walk of the year, isn’t it?” said three-time Masters winner Nick Faldo. “Downhill, you get shin splints — and that’s being fit.”

Woods is far from that, which makes the Masters the ultimate reach. The summer is a better guess, but even that could prove elusive. Woods has not disclosed the degree of his foot and ankle injuries, the true issues in moving forward. It might not just be a matter of him outworking this, as he has been prone to do in the past.

Walking an 18-hole round seems to be the first goal — and that is not possible yet. So where does walking 72 holes fit in? Or 90, as would be required during a normal week with practice? What about standing for five hours at a time, hitting the shots under duress?

LaCava, with nothing more than a guess, said he expected it could take 18 months from the time of the accident until Woods might be ready. That puts him into August. Who knows?

What LaCava does know is he saw Woods hit no shots before the Friday pro-am. He did not see any of the video of Woods practicing in the Bahamas nor the conjecture about how fast or slow he would return.

He just knew that Tiger said he was coming back with his son to an event that they enjoyed last year. LaCava was on board to see how it transpired.

“I get a lot more positive energy than I do negative energy, to be honest with you,” LaCava said. “I don’t know if he’s putting on a happy face for me. I’d like to think he’s being that way most of the time when I’m not around. He’s been very positive throughout the entire process.”

Woods sure looked happy on Sunday. It was a spirited effort provided by him and Charlie. And while he spent most of the weekend in a cart, he did get out to walk the remaining 200 yards or so to the final green.

That was the true victory this week.

When we see him in this setting next will likely be a good bit into the future. LaCava will be there, patiently waiting, as always.