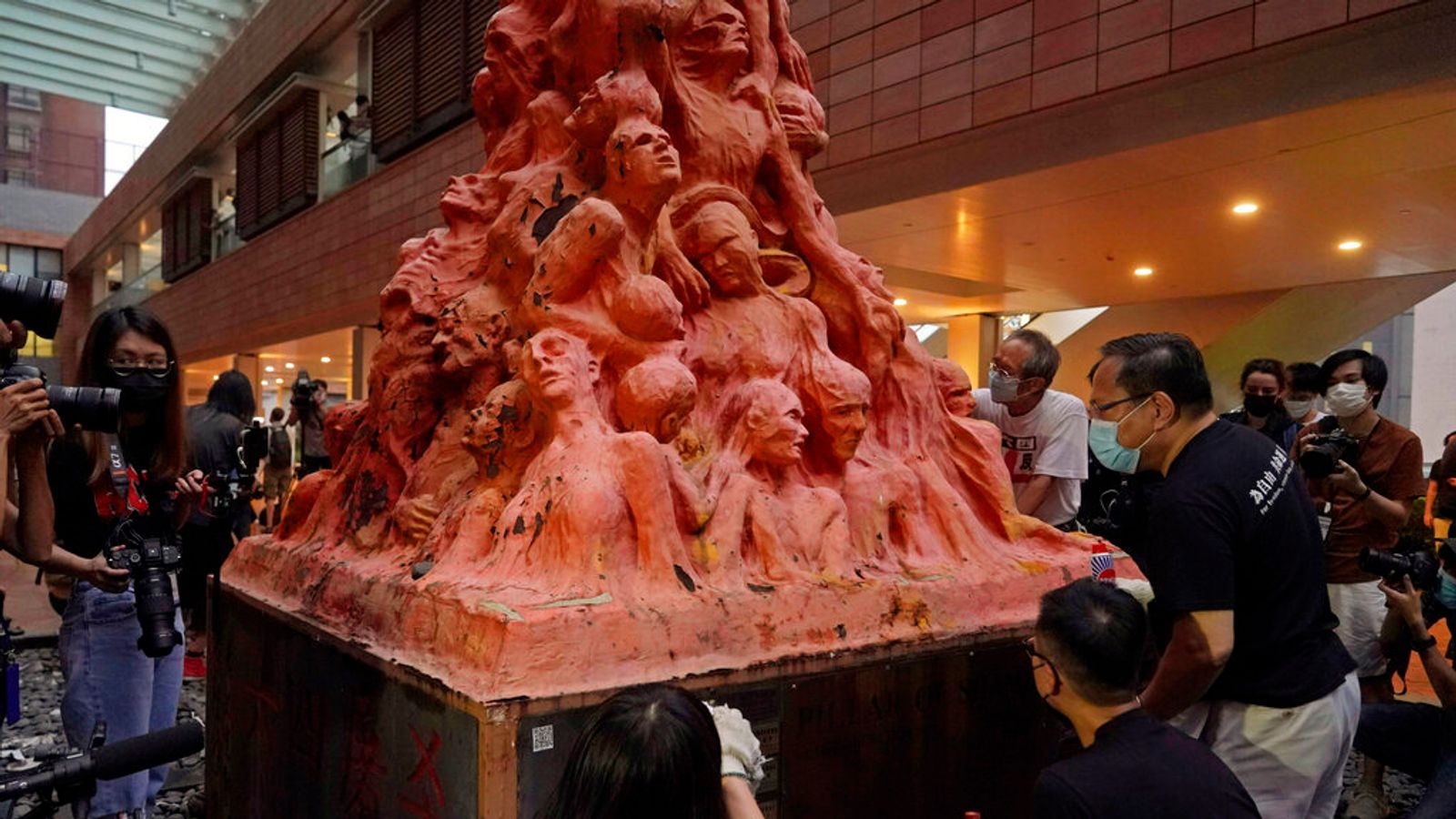 A monument at the University of Hong Kong which marks the 1989 Tiananmen Square massacre has been removed.

Depicting a heap of anguished human torsos, the famous statue commemorated pro-democracy protesters killed during a crackdown by Chinese authorities – and stood for more than two decades.

In a statement, the Council of the University of Hong Kong (HKU) said it decided to remove it during a Wednesday meeting, “based on external legal advice and risk assessment for the best interest of the University”.

“The HKU Council has requested that the statue be put in storage, and that the University should continue to seek legal advice on any appropriate follow up action,” it said.

What’s the history of the statue?

Known as the “Pillar of Shame”, the statue was a symbol of the wide-ranging freedoms promised to Hong Kong at its 1997 return to Chinese rule.

It was one of the few remaining public memorials in the former British colony to remember the 1989 massacre – which remains a taboo topic in China to this day.

Is its removal down to China?

Hong Kong authorities have been clamping down under a China-imposed national security law that human rights activists claim is being used to suppress civil society, jail democracy campaigners and curb basic freedoms.

But authorities claim the law has restored order and stability after massive street protests in 2019, and insist freedom of speech and other rights remain intact, and that prosecutions are not political.

China has never given a full account of the 1989 Tiananmen Square crackdown, with officials providing a death toll of around 300 – however rights groups and witnesses say thousands may have been killed.

Before it was torn down, workmen in yellow hard hats were seen entering the statue site, which had been draped on all sides with white plastic sheeting and was being guarded by dozens of security personnel.

Noises from power tools and chains could be heard from the closed-off area, and the top half of the statue was lifted by a crane towards a waiting ship container.

A truck later drove the container away on Thursday morning.

The university had previously sent a legal letter to the custodians of the statue asking for its removal, and said in its statement that no party had ever obtained approval to display the statue on its campus.

It said the university had the right to take “appropriate actions” any time and called the statue “fragile” – possibly posing “potential safety issues”.

Jens Galschiot, the Danish sculptor who created the statue, said in a statement he was “totally shocked” and that he would “claim compensation for any damage” to his private property.

Some students expressed their disappointment at the removal of the statue, with 19-year-old Chan saying: “The university is a coward to do this at midnight. I feel very disappointed, as it’s a symbol of history.”

Another said he was “heartbroken” to see the statue “being cut into pieces”.

Nadhim Zahawi : ‘It’s obvious Zahawi can’t stay on’ – Labour leader
Ex-boyfriend of George Santos speaks out to CNN
US Coast Guard says this ship off Hawaii coast is a Russian spy ship
‘I was sad for the institution’: Nancy Pelosi speaks out about McCarthy speaker vote
The moment Zelenskyy hears about tank delivery