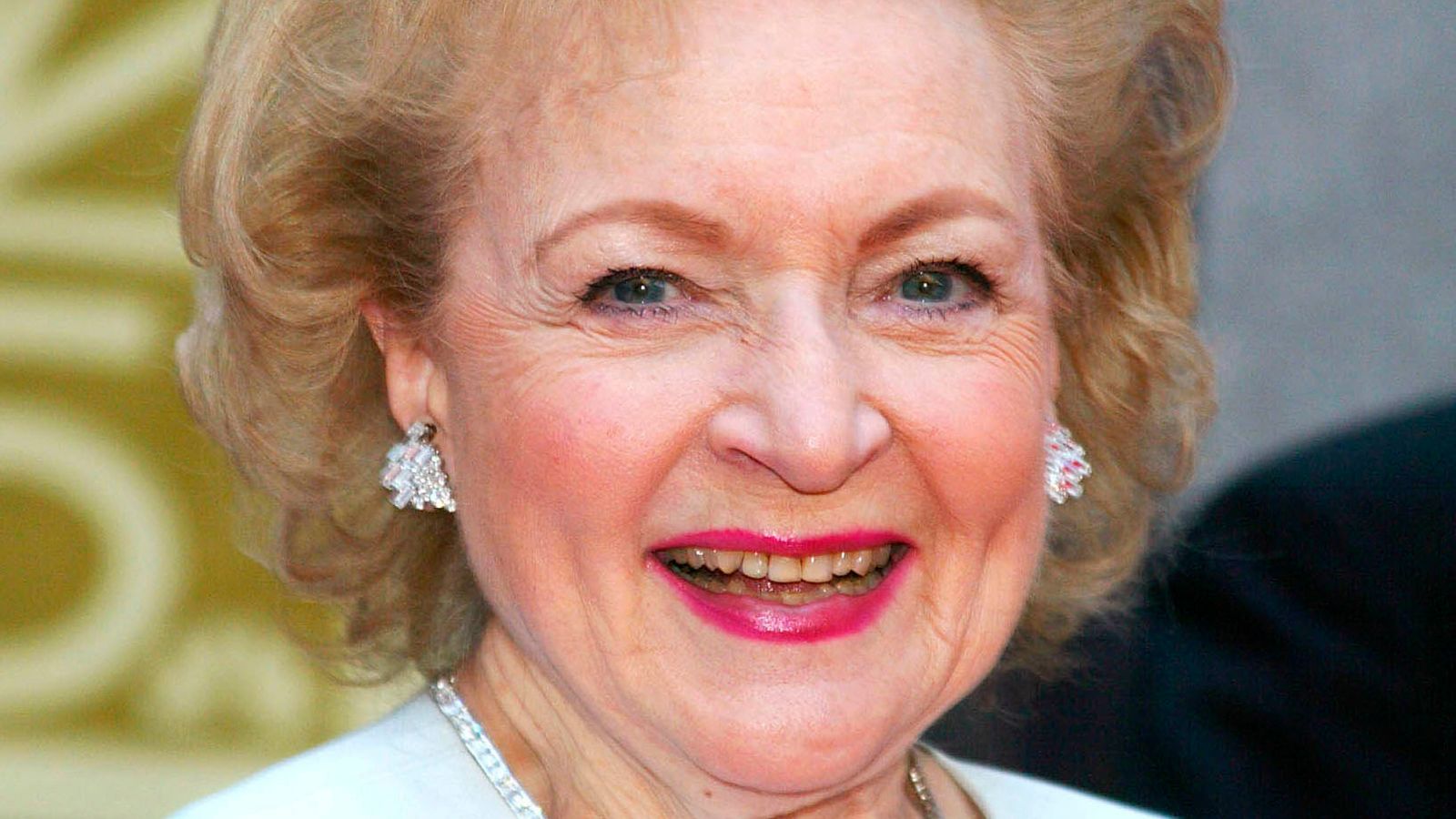 Tributes have been paid to veteran actress Betty White who has died less than three weeks before her 100th birthday.

Her death was confirmed by her longtime agent and close friend, Jeff Witjas. He told Associated Press news agency: “I truly never thought she was going to pass away.

“She meant the world to me as a friend. She was the most positive person I’ve ever known.”

The elderly actress with a naughty sense of humour

Mr Witjas said White had been staying close to her home in Los Angeles during the pandemic out of caution, but had no diagnosed illness.

US President Joe Biden lead the tributes to the veteran screen star.

He tweeted: “Betty White brought a smile to the lips of generations of Americans. She’s a cultural icon who will be sorely missed.

“Jill and I are thinking of her family and all those who loved her this New Year’s Eve.”

We are saddened by the passing of Betty White.

Not only was she an amazing actress, she also served during WWII as a member of the American Women’s Voluntary Services.

A true legend on and off the screen. pic.twitter.com/1HRDYCeV7w

The world looks different now. She was great at defying expectation. She managed to grow very old and somehow, not old enough. We’ll miss you, Betty. Now you know the secret. pic.twitter.com/uevwerjobS

Happy Days star Henry Winkler wrote on Twitter: “I(t) is very hard to absorb you are not here anymore.. But the memories of your deLIGHT are.. Thank you for your humour, your warmth and your activism… Rest now and say Hi to Bill.”

US comedian and TV host Seth Meyers also paid tribute, writing on Twitter: “RIP Betty White, the only SNL host I ever saw get a standing ovation at the after party. A party at which she ordered a vodka and a hotdog and stayed til the bitter end.”

1) Betty White. Where do I begin? I’ve known her long, but I think the first time I met her was when she was a guest star on Suddenly Susan in the late 90s. Everyone was very excited she was on the show. I had accidentally parked in her parking spot that day. She walks in…

Director Nancy Meyers wrote on Instagram: “Too much sadness! I posted once how she changed my life. She was the first person who made me believe I could be a writer.

“What an enormous thing to do for another person. I bet there’s hundreds of us who she helped over the years.”

Singer Dionne Warwick wrote on Twitter: “Another brilliant talent has made her transition. I had the pleasure of getting to know Betty White and shared a few giggles with her. May she rest in well-earned peace.”

House Speaker Nancy Pelosi described White as a “beloved TV icon”. She wrote on Twitter: “Betty White was a pioneering actress, who blessed generations of Americans with her talent and humor for 8 decades. May it be a comfort to her loved ones and many admirers that so many mourn with them during this sad time.”

Legally Blonde actress Reese Witherspoon tweeted: “So sad to hear about Betty White passing. I loved watching her characters that brought so much joy. Thank you, Betty, for making us all laugh!”

She wrote on Twitter: “Godspeed, Betty White, you will be remembered and treasured forever.”

Sex And The City actress Sarah Jessica Parker shared an image of White on her Instagram, with the caption “a treasure”.

Actress Viola Davis wrote on Twitter: “Man did I think you would live forever. You blew a huge hole in this world that will inspire generations.

A pioneering career which began before the Second World War

White, who was born in Oak Park, Illinois, in 1922, started her entertainment career in radio in the late 1930s.

She made her TV debut singing on an experimental channel in Los Angeles in 1939.

After serving in the American Women’s Voluntary Service, which helped the US effort during World War Two, she was a regular on Hollywood on Television, a daily five-hour live variety show, in 1949.

A few years later she became a pioneering woman in television by co-founding a production company and serving as a co-creator, producer and star of the 1950s sitcom Life With Elizabeth.

Through the 1960s and early 1970s White was seen regularly on television, hosting coverage of the annual Tournament of Rose Parade and appearing on game shows such as “Match Game” and “Password”.

White reached a new level of success on The Mary Tyler Moore Show, playing the host of a home-making television show, the snide, lusty Sue Ann Nivens, whose credo was “a woman who does a good job in the kitchen is sure to reap her rewards in other parts of the house”.

The actress won best-supporting actress Emmys for the role in 1975 and 1976.

She won another Emmy in 1986 for The Golden Girls, a sitcom about four older women living together in Miami that featured an age demographic rarely highlighted on American television.

White also was nominated for an Emmy six other times for her portrayal of the widowed Rose Nylund, a sweet, naive and ditzy Midwesterner, on the show, which ran from 1985 to 1992 and was one of the top-rated series of its time.

After a less successful sequel to The Golden Girls came a series of small movie parts, talk-show appearances and one-off television roles, including one that won her an Emmy for a guest appearance on The John Larroquette Show.

By 2009 she was becoming ubiquitous with more frequent television appearances and a role in the Sandra Bullock film The Proposal.

In 2010, she appeared as the slightly unhinged professor June Bauer in the popular US sitcom Community.

She once turned down a role in the Hollywood movie As Good as It Gets because of a scene in which a dog was thrown in a garbage chute.

White had no children and her third and final husband of 20 years, Allen Ludden, died in 1983.