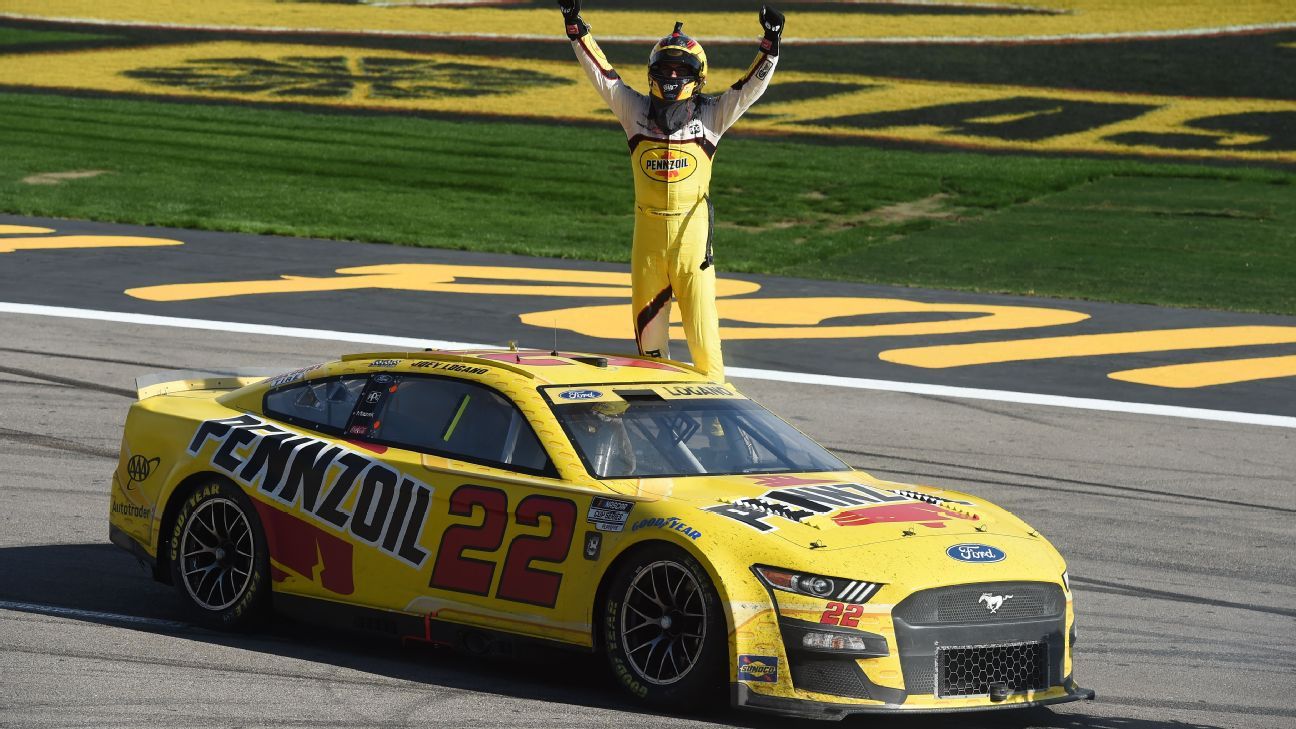 “We’re racing for a championship! Let’s go!” Logano screamed to the crowd. “All you want to do is get to the championship four when the season starts and race for a championship, and we’ve got the team to do it. I don’t see why we can’t win at this point.”

Logano, who won for the third time this season and third time at Las Vegas, is NASCAR’s 2018 champion and advanced to the championship race for the fifth time in his career. Team Penske last month celebrated the IndyCar championship when driver Will Power won his second title.

Logano used a late pit stop for new tires hoping the new Goodyears would give him a shot. He gained six immediate spots, but his Ford was still in eighth on the final restart with 16 laps remaining.

Chase Briscoe restarted as the leader ahead of Justin Haley and Ross Chastain, and Chastain used a sweeping three-wide pass on the bottom of the track to take the lead. Logano charged through the field, but Chastain successfully used several blocks to hold him off.

Logano ultimately pulled alongside Chastain on the frontstretch with three laps remaining to claim the first spot in next month’s championship race.

“There was a clear difference in tires there, so we fully believed that we could hold him off and win the race on the tires we had, and Joey did a good job of getting through the field,” said Chastain, who finished second in a Chevrolet for Trackhouse Racing.

Kyle Busch, who was eliminated from the playoffs in the first round, finished third in a Toyota for Joe Gibbs Racing.

Playoff drivers Briscoe finished fourth in a Ford for Stewart-Haas Racing and Denny Hamlin, in a Toyota from Joe Gibbs Racing, came from 31st to finish fifth.

The race was the first of three in this round of NASCAR’s playoffs. The eight remaining drivers will be whittled down to four for the winner-take-all finale at Phoenix next month.

With the stakes so high, the race was fraught with tension from the start and even included a near fight between Bubba Wallace and reigning NASCAR champion Kyle Larson.

The dustup between Wallace and Larson collected Christopher Bell, who won last week at Charlotte to advance into this round of the playoffs and is now ranked last in the standings following his 34th-place finish.

“We will see if we can go pull another rabbit out of the hat,” Bell said.

Joining Bell below the cut line for elimination were William Byron, Briscoe and Ryan Blaney of Team Penske. Blaney led for 39 laps but hit the wall with what appeared to be a tire failure. He finished 28th, seven laps down.

Logano is locked in to the finale, while Chastain, Hamlin and regular-season champion Chase Elliott are above the cut line. Elliott finished 21st in an uninspiring showing in his Hendrick Motorsports entry.

“I did a really bad job all weekend,” Elliott said. “All-around poor effort on my behalf, and when you perform that poorly, you get poor results. I’m obviously missing something at places like this to compete with the gentlemen that know what they’re doing.”

The Associated Press contributed to this report.