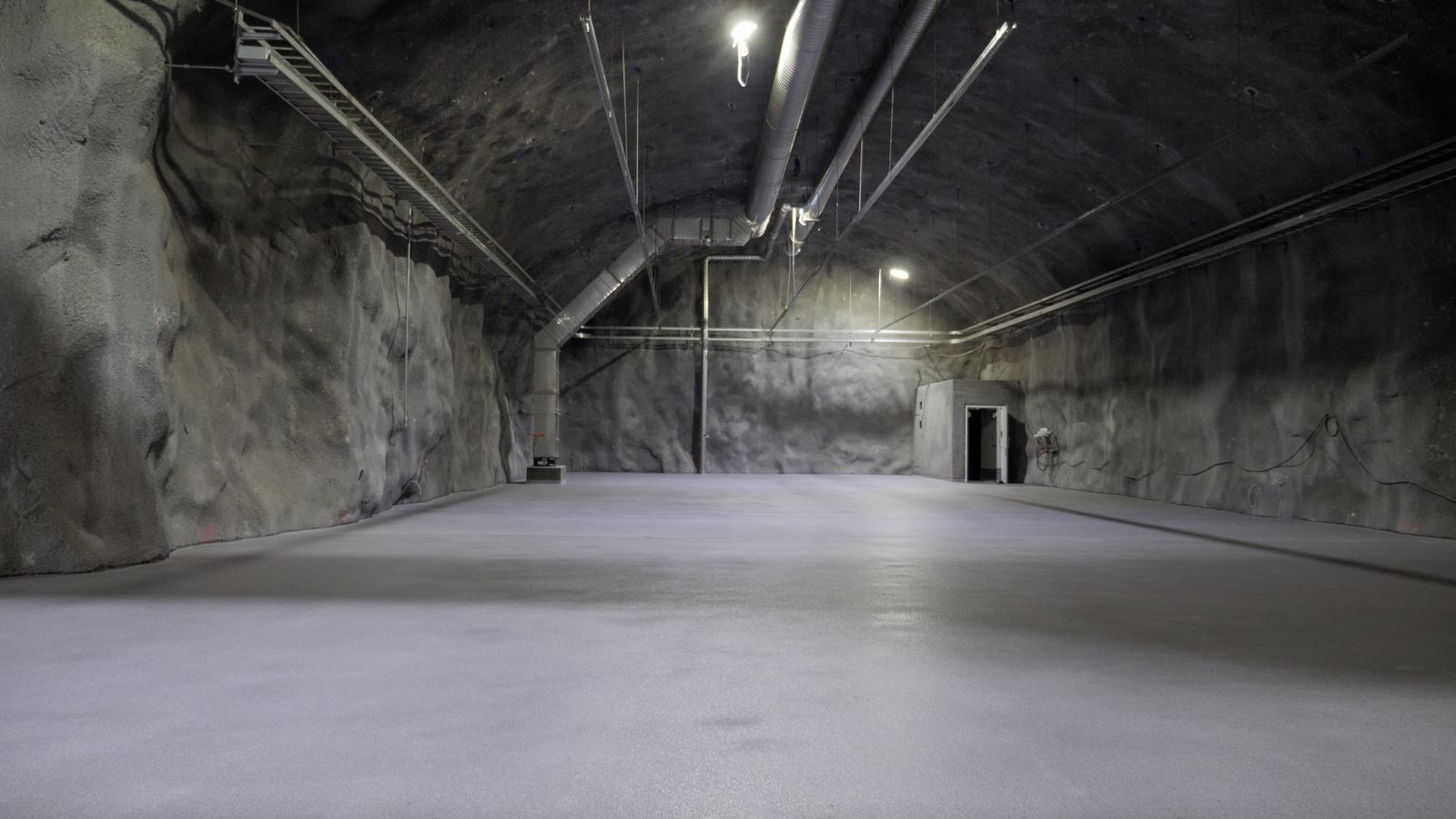 The world’s first geological tomb for nuclear waste is rapidly taking shape more than 400 metres below the forests of Finland.

Batches of lethally radioactive uranium will start arriving within two years for burial in the warren of tunnels carved into the bedrock.

Other countries, including the UK, are considering plans to build their own geological disposal facilities, which should safely isolate the 260,000 tonnes of highly radioactive waste that has accumulated worldwide since the dawn of nuclear power in the 1950s.

Sky News was given rare access to the site, called Onkalo, which means “cavity” in Finnish. It is built next to three nuclear reactors on the country’s southwestern coast.

Security was so tight in the aftermath of the sabotage of the Nord Stream gas pipeline that there was a strict no-filming rule above ground.

But we were taken down the 5km access road that winds through the bedrock, so deep that our ears popped.

At the bottom, further tunnels fanned out. So far five have been completed, but up to 100 could be built over the coming decades, stretching to more than 40 miles in all.

Our guide was Sanna Mustonen, a geologist and senior project manager for Posiva, the company that runs the facility.

She said the bedrock was formed almost two billion years ago and has remained intact ever since.

“The rock itself, like in the whole area of Finland, is very stable,” she said.

“We have old rock. We don’t have continental plates nearby, so we don’t have any earthquakes, seismicity, or things like that.”

‘There must be security’

Like other countries Finland stores spent nuclear fuel above ground in shielded bunkers while it seeks a long-term solution.

But Mika Pohjonen, managing director of Posiva, said it would be irresponsible to leave such dangerous waste where it could fall into the wrong hands.

He told Sky News: “If you look at history, 300 years back, how many wars have there been in Europe, for example?

“On the surface the interim storage needs active measures from humans, the building needs to be heated, the spent fuel must be cooled, there must be security around it.

“If you look a generation forward you cannot really see that that kind of arrangement would be risk-free enough.”

Various solutions to the nuclear industry’s waste problem have been suggested, including: launching it into deep space, burying it in an ocean trench and dropping it into a fissure in the Earth’s crust.

They’ve been dismissed as unfeasible, expensive or environmentally risky.

‘Safe for one million years’

Instead, Posiva will encase spent nuclear fuel in double-layered metal cannisters that will slot into holes bored in the floor of the tunnels.

To keep them dry, they will be swaddled in bentonite, an absorbent material used in cat litter.

More bentonite will be used to backfill the tunnels, which will be plugged with concrete.

When the complex is full in around a century’s time, with perhaps as many as 3,250 cannisters, it will be sealed up and all trace removed above ground.

“It will be safe for one million years,” Mr Pohjonen said.

“There may not be humans here any more because in that time there will be ice ages or [this area will be] underwater but this is designed to keep it out of the biosphere.”

Dummy cannisters are already buried in bentonite and surrounded by sensors.

Some scientists have warned water could corrode the metal, become radioactive and then rise to the surface over millennia.

But Posiva says the multiple barriers keep the waste in and water out. And if there was a leak in a highly unlikely worst-case scenario, modelling shows that by the time any water reached the surface in 10,000 years the radioactivity would have decayed so much that it would not be a threat to life.

Finland’s progress has been watched closely by other countries. Sweden has begun construction of its own deep geological disposal site. France, Switzerland and the UK are further behind.

A shortlist of four possible sites in Cumbria and Lincolnshire has been drawn up.

Bruce Cairns, chief policy adviser at the UK’s Nuclear Waste Services, was also taking a look at Onkalo while we were there.

He said responsible permanent disposal for waste is essential as the country commissions a new generation of reactors.

“We have 70 years’ worth of waste in the UK that’s already accumulated from energy production, defence and industrial processes.

“It’s not going anywhere unless we do something with it. We have to take action to make sure this is managed responsibly, not just for now but for the long term as well.”

Key to Finland’s progress has been engagement with the local community.

The nearest settlement is Eurajoki, about 10 miles away.

The existing nuclear reactors were already big local employers and when the area was selected from a shortlist of disposal sites the local authority voted overwhelmingly in favour.

Vesa Lakaniemi, the town’s mayor, said: “We have had nuclear power here for 40 years.

“People know about nuclear and final [waste] disposal much more than in the areas which don’t have a nuclear power plant.

“Trust has developed over four decades.”